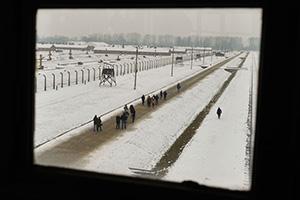 Israel and Poland are feuding over a bill that would make it a crime to blame Poles for Holocaust-era atrocities.

The spat broke out late Saturday after the Polish lower house of parliament approved the proposed legislation on a date heavy with resonance: the 73th anniversary of the liberation of the most notorious German Nazi death camp, Auschwitz-Birkenau in Poland.

Poles say they are unfairly held complicit in Nazi war crimes at a time when their country was occupied and an estimated 2.7 million non-Jewish civilians were killed, including a large number of resistance fighters. Israeli leaders and Holocaust survivors see the proposed legislation as an attempt to whitewash Polish crimes against the Jews.

“We will not tolerate distorting the truth, rewriting history or denying the Holocaust,” Prime Minister Benjamin Netanyahu said at the start of the Israeli cabinet meeting on Sunday.

Some historians of the Holocaust have concluded that Poles made the Nazi genocide possible. Poland’s Jewish community was the biggest in all of Europe before World War II, and only a small fraction survived the war.

Poland objects to that narrative, and for years has sought to eradicate the use of phrases such as “Polish death camps” that suggest collaboration with the Nazis. The draft law would impose fines or up to three years in jail for claiming that Poland bears responsibility for crimes against humanity committed by Nazi Germany on its soil.

“Jews, Poles, and all victims should be guardians of the memory of all who were murdered by German Nazis. Auschwitz-Birkenau is not a Polish name, and Arbeit Macht Frei is not a Polish phrase,” Polish Prime Minister Mateusz Morawiecki wrote on his Twitter account after the annual ceremony at the camp’s museum.

The Israeli Foreign Ministry summoned the Polish deputy ambassador to demand the bill be revised, and opposition to the proposed legislation crossed party lines.

The Holocaust “was conceived in Germany but hundreds of thousands of Jews were murdered without ever meeting a German soldier,” Yair Lapid, chairman of the opposition Yesh Atid party and the son of a Holocaust survivor, wrote on his Twitter account. “There were Polish death camps and no law can ever change that.”

The Polish envoy, Piotr Kozlowski, told reporters after his meeting at the Foreign Ministry that “the intent of the law is by no means to whitewash the history but to safeguard the truth about the Holocaust and prevent its distortion.”

The bill still requires approval of the upper house and must be signed by President Andrzej Duda to become law. The head of the president’s office is scheduled to meet with the Israeli ambassador to Poland on Monday to discuss the bill, the office said in a statement. Beata Mazurek, spokeswoman for Poland’s ruling Law & Justice party and deputy speaker of lower chamber of parliament, ruled out any amendments to the law.

More than 3 million Jews lived in Poland before the war. About 380,000 survived the genocide, the rest having died in ghettos and death camps there, according to Israel’s Yad Vashem Holocaust memorial.

Over 1 million Jews died at Auschwitz-Birkenau alone, according to its museum’s website. About 140,000 Poles were imprisoned there, and almost half of them died. While some Polish civilians participated in the murder of Jews or turned them over to Nazis to avoid being executed for hiding them, others resisted. About 6,700 Poles were commemorated by Yad Vashem for rescuing Jews, the largest number in any country.

Continued Israeli airstrikes on Syria are testing Moscow’s patience, Jerusalem would do well not to poke the Russian bear

Nicola Sturgeon, and Scottish independence, forges on. The Salmond case is not the Watergate her enemies hoped for