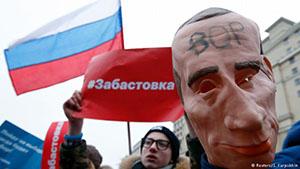 “Citizens, please move aside. You are blocking the way for pedestrians.” Again and again, the policeman’s voice could be heard from the loudspeaker van on Moscow’s Pushkin Square. The approximately 2,000 protesters who had gathered for the demonstration, which was not approved by Russian authorities, ignored the messages. Instead, they loudly shouted “Free Russia” or “Russia without Putin.” DW’s Emily Sherwin tweeted from the protest, writing that people were calling Putin and Moscow’s mayor, Sobyanin, “thieves.”

One demonstrator, who did not want to reveal his real name for fear of state reprisals, complained that “for 18 years we have had the same president – it’s enough!” A woman standing near him agreed. “We want an alternative to the current rulers and we demand freedom of speech.”

Another man, wrapped in a black coat, was similarly angry. “The upcoming presidential elections are like a theater play.” A 14-year-old girl, who came to the protest with her friend, said a strong president should not fear free elections. She added: “I want things to happen in an honest fashion that respects the rule of law.” The complaint is that the Kremlin prohibits Russians from voting for the candidate they want.

They were referring to Alexei Navalny, who should have been leading the protest. But instead, he was swiftly arrested by Russian police upon leaving his Moscow home, before being released later on Sunday. His lawyer Olga Michailova said Navalny would have to remain in contact with the authorities, the Tass news agency reported.

Navalny has been formally barred from taking part in March’s presidential election because of a corruption conviction. He was given a five-year suspended sentence in a retrial in 2017 year on embezzlement charges. The 41-year old has urged his supporters to boycott the vote. He is widely seen as the only candidate who might have a chance of challenging Putin.

When the protesters on Pushkin Square heard of Navalny’s arrest, they became even more furious, lambasting Russian President Vladimir Putin. One of the protesters called him a criminal who governs Russia with the help of his secret service buddies. Around him, other demonstrators nodded in agreement. Then, someone in the crowd shouted “Zabastovka,” which roughly translates as “strike,” “protest” or “election boycott.”

Then, the crowd began moving once more. The police stood back, without interfering. Dozens of TV reporters covered the protest march. DW’s Emily Sherwin tweeted that there was a huge police presence at the protest.

While in most places the authorities allowed demonstrations, the police in St. Petersburg and Moscow have banned public protests. But the angry protesters are not letting themselves be intimated. According to Russian police, 185 protesters across Russia, including Navalny, had been arrested by early evening. The number is likely to increase further overnight.