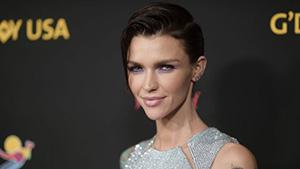 Australian actress Ruby Rose has left her sick bed after back surgery to attend the annual G’Day USA event in Los Angeles.

Rose, wearing a sleek silver dress, appeared to walk without the aid of a cane or frame, which she had been pictured with on social media in recent days after having surgery to correct a “spinal issue”.

About 10 days ago, Rose, 31, tweeted about the surgery to her 1.3 million followers.

“So… for the past few years (decade) I’ve been dealing with a spine issue,” she tweeted. “I am now recovering from a back procedure, but I do need to stay active, so before I get seen with my cane and wheelchair in public, I’d rather put it out there that I’m fine and going to be fine.”

However, some social media users interpreted her comments, which implied she had to “warn” people about her condition, as offensive to people with disabilities.

Rose later tweeted: “I am very deeply sorry if it wasn’t worded correctly. For that I am sorry. I did have a fear as to what was going to happen if I didn’t say something first and I put thought into what I said but I didn’t consider that angle.”

On Sunday night, Rose paid tribute to her friend, actor Heath Ledger, who died 10 years ago and was honoured at the G’Day USA event.

“Celebrating amazing Achievements with @RebelWilson by fellow Australians like @MargotRobbie followed by eating chocolate in bed past midnight with my dogs – Thinking about the times I’d drink Beers with Heath at the local pub. This is a great Saturday,” she tweeted.