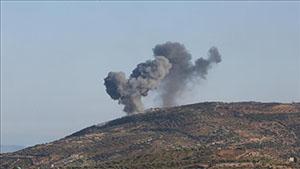 The Turkish General Staff announced on Jan. 28 that the Turkish army and the Free Syrian Army (FSA) forces captured the strategic Mount Bursaya in northern Syria as part of the ongoing “Operation Olive Branch,” which was launched to remove People’s Protection Units (YPG) militants from the district of Afrin.

“The Turkish Armed Forces captured Mt. Bursaya as part of ‘Operation Olive Branch.’ Operations to clear terrorists from the area are continuing,” the General Staff said in a statement.

It said the strategic peak was captured by the Turkish military and the FSA at around 2:30 p.m. local time on Jan. 28.

The capture came after Turkish forces and FSA fighters advanced on the peak from the northwestern Syrian city of Azaz, which Turkey and its ally control.

According to the military, YPG militants used Mt. Bursaya to target civilians in the center of Turkey’s Kilis province and Syria’s Azaz through mortar shells, artillery, and missiles.

On Jan. 24 two civilians were killed by a rocket attack on a mosque in Kilis, and on Jan. 27 at least three civilians, including a child, were injured by YPG attacks on Kilis and the Turkish border province of Hatay.

Speaking in the Central Anatolian province of Çorum earlier on Jan. 28, Turkish President Recep Tayyip Erdoğan said the strategic Mt. Bursaya would be captured soon by the Turkish army.

Erdoğan said 484 YPG militants were “neutralized” during “Operation Olive Branch” in Afrin, which was launched on Jan. 20.

“I just spoke with the [military] commander. I asked how many [militants] were neutralized. He said 484. He also said that he hopes Mt. Bursaya will be captured soon,” Erdoğan said.

“Neutralized” is a term used by the Turkish military and officials to indicate militants were either killed, wounded or captured.

Speaking later on the same day at a provincial congress in the Black Sea province of Amasya, after Mount Bursaya was completely captured, Erdoğan said: “Our soldiers are walking toward Afrin. They captured Bursaya Mountain. They finished it in the face of irresponsible people. They ended it despite the European Parliament. Some people in the European Parliament are calling my military an occupation force. Take a look at yourself [EU].”

“We are receiving very encouraging, very good, very positive news from everywhere, particularly from our brothers and sisters in Afrin. Do you know what the locals, who have heard the news that their villages were cleared from terrorists, are saying? ‘We are safe because the Turks are here now,’ they say,” Erdoğan added.

The Turkish military and FSA forces engaged in heavy clashes with YPG militants in the area, according to state-run Anadolu Agency reporters in the region.

The battle at Mt. Bursaya, a strategic peak in northeast Afrin, intensified early on Jan. 28, the ninth day of Turkey’s offensive, as Turkish-backed forces continue to clear more territories of the YPG as part of its operation in northwestern Syria, said the reporters.

Two Turkish soldiers were killed and 11 others were wounded with no life threatening injuries during clashes with YPG militants during the operation into Afrin on Jan. 27, the Turkish military said.

Erdoğan said a total of seven Turkish soldiers and 13 FSA members were killed since the beginning of the military operation.

According to a statement issued by the Turkish General Staff, the army had “neutralized” 53 YPG and ISIL militants alone on Jan. 27.

The statement said 22 Turkish jets safely returned to their bases after destroying 42 targets used as weapon pits, shelters, and ammunition depots by the YPG and ISIL.

“Operation Olive Branch” is “successfully continuing as planned,” it added.

The military said it was showing utmost care in order not to harm any civilians during the operation. 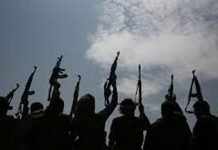 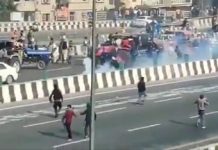