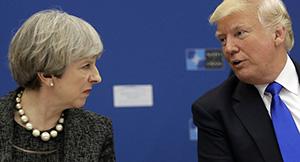 LONDON (Sputnik) – Washington will become London’s major trade partner after the United Kingdom’s withdrawal from the European Union, US President Donald Trump said in an interview with UK ITV broadcaster, released on Monday.

In his first international interview since assuming office in January 2017, Trump pledged to conclude a trade deal with the United Kingdom.

The United Kingdom’s withdrawal from the bloc is due to take place before late March 2019.

Earlier, Trump said at a joint press conference with UK Prime Minister Theresa May, that trade between the United States and United Kingdom will increase dramatically over in the new few years.

US Secretary of the Treasury Steven Mnuchin said on Thursday that Washington would be ready to negotiate a post-Brexit trade deal with the United Kingdom as soon as London is ready.