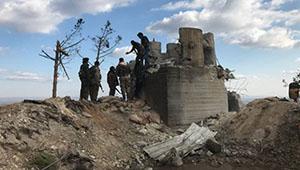 The capture came on the seventh day of Operation Olive Branch, which was jointly launched on Jan. 20 by Turkish troops and FSA fighters in Afrin against the Syrian Kurdish Democratic Union Party (PYD).

The Turkish military and government sources stated that 484 terrorists and 20 Turkish soldier and FSA fighters have been killed so far in the operation in Afrin.

Turkish Foreign Minister Mevlüt Çavuşoğlu on Saturday called on the United States to withdraw personnel from the Kurdish-held town of Manbij in northern Syria, amid tension that escalated between Ankara and Washington following Turkey’s operation Afrin.

Turkish President Recep Tayyip Erdoğan on Friday reacted to calls from the US to wrap up an operation in Afrin, defying Washington and saying that Manbij would be the next target.

Manbij is controlled by the Kurdish-led, US-backed PYD, which Turkey sees as the Syrian extension of the outlawed Kurdistan Workers’ Party (PKK).

President Erdoğan on Oct. 8 said Turkey would not allow a Kurdish corridor in Syria extending along the Turkish border to the Mediterranean.