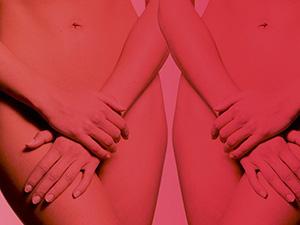 Abdominal pain, heavy periods, menstrual cramps, and painful sex just sound like some of the routine burdens of being a woman. Monthly pains and annoyances around menstruation are a given, and painful sex is (unfortunately) very normal for many. But these symptoms are also hallmark signs of endometriosis, a severely painful and under-diagnosed medical condition that affects about 10 percent of women.

Endometriosis happens when endometrial tissue, which normally lines the inside of the uterus, grows elsewhere in the body, like on the ovaries or in the fallopian tubes. This abnormal growth causes an inflammatory response, and “this tissue is then able to reproduce itself as part of an inflammatory process,” Tamer Seckin, M.D., an NYC-based gynecologist who specializes in treating women with endometriosis, co-founder of the Endometriosis Foundation of America, and author of Recognizing and Treating Endometriosis, tells SELF. “We don’t know exactly how it gets there,” he adds, though genetics seem to play a role. Whether your case is considered mild, moderate, or severe depends on how widespread the growths are.

Endometriosis affects women during their fertile years, so after their first period, but before menopause. It’s estimated that one in 10 girls and women in the U.S. suffer from it, but many are never diagnosed or are misdiagnosed for years. Endometriosis can cause serious pain and is a one of the leading causes of infertility, so learning you have it is important so you can take full control of your sexual and reproductive health.

These are the most common symptoms of endometriosis that all women of child-bearing age need to be aware of.

Many women with endometriosis experience extremely heavy periods and may even notice clots in their period blood. When you get your period, the endometrial growths react to menstrual hormonesfrom your ovaries the same way the lining of your uterus does, so they grow and bleed, too. As endometrial growths get bigger over time, they can bleed even more.

“Many endometriosis patients’ symptoms start very early in their menstrual life,” Seckin says. The Mayo Clinic notes the condition usually develops a few years after the first period, so women with endometriosis may just think that’s what a normal period is supposed to look and feel like.

Pelvic pain is typically the most obvious symptom of endometriosis. Some people may have chronic pain that never goes away, but it usually gets particularly bad right before and during menstruation. When endometrial tissue bleeds in places where it can’t (or can’t easily) exit your body, it can cause swelling and pain, the U.S. Department of Health and Human Services explains. This cramping pain is usually most intense in the lower abdomen and lower back—like regular period cramps but way worse. “The pain could be localized, but it could also cause a shooting pain into the groin, back, or rectum,” Seckin explains.

In more moderate to severe cases, some women may develop blood-filled cysts, called endometriomas. If they rupture, they can be extremely painful and cause heavy bleeding.

Some women experience very little pain, though, so they never visit a doctor for help—having a more severe case doesn’t necessarily mean you’ll experience more pain. This is one of the reasons endometriosis is so under-diagnosed. Other women may experience pain but never say anything, writing it off as just bad period cramps. “There are some who either suppress or don’t articulate their symptoms because they don’t want to admit they have a problem until it really interferes with their life,” Seckin says.

Endometriosis can cause constipation, diarrhea, intestinal pain, and pain with bowel movements. These symptoms also look a lot like a gastrointestinal problem or a food intolerance, which is why endometriosis is often confused with IBS. “Many women with endometriosis go for intense bowel workups and colonoscopies, and they’re given special diets,” Seckin says, in an attempt to alleviate a GI problem. Sometimes IBS can accompany endometriosis, which can make a diagnosis that much more complicated. While good bowel health could have a positive effect on some types of endometriosis pain, it’s not going to make it disappear.

Painful sex is another big indicator of endometriosis. The pain can happen during sex, right after, or even continue into the day after, Seckin says. “Pain with orgasm is common, but people don’t usually articulate it,” he adds. Sex can be even more painful before or during your period, when the tissue becomes most inflamed.

There are plenty of other things that can make sex painful (like not being lubed up enough or even having a hidden STD), but when it’s combined with any other abdominal pain, endometriosis could be the culprit. “If someone is having painful periods and bowel movements, and pain during sexual intimacy, it’s a very prognostic sign and highly implies endometriosis,” Seckin says.

Up to 50 percent of women with endometriosis experience infertility. It’s actually possible that the only symptom of the disease you have is infertility. For many women, they don’t learn that they have endometriosis until they start having trouble getting pregnant and go in for a full fertility workup. “A lot of women come to us, after spending tens of thousands of dollars on IVF and other failed fertility treatments, with no relevant symptoms,” Seckin says, “and you can find every degree of endometriosis.”

“If you fail two or three rounds of IVF, especially if you have painful periods, definitely go and be checked,” Seckin recommends. (The only true way to diagnose endometriosis is a procedure called laparoscopy, where you’re put under anesthesia and a small incision is made and the tissue is actually examined.) Depending on how severe your case is, removing the endometrial tissue completely can increase your chances of conceiving and carrying a pregnancy to term. Take your health into your own hands, and ask your doctor about endometriosis if you think you’re suffering from it.