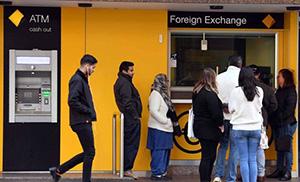 SYDNEY: Australia’s biggest bank, the Commonwealth, was Tuesday taken to court by the corporate watchdog over allegations it rigged the benchmark interest rate, the latest of several of regulatory probes into the embattled institution.
The Commonwealth Bank of Australia (CBA) is already facing a civil case brought by Australia’s financial intelligence agency AUSTRAC for alleged “serious and systemic non-compliance” of anti-money laundering laws concerning thousands of transactions.
AUSTRAC last month accused the bank of further breaches, by failing to adequately monitor suspected terrorist financiers.
The new case, filed by the Australian Securities and Investments Commission (ASIC) in Federal Court Tuesday, alleges that CBA engaged in “unconscionable conduct and market manipulation” when setting the bank bill swap reference rate (BBSW).
ASIC claimed that on three separate occasions in 2012, CBA “traded with the intention of affecting the level at which BBSW was set so as to maximize its profits or minimize its losses to the detriment of those holding opposite positions to CBA’s.”
There was no immediate comment from CBA. Its shares closed down 0.13 percent at Aus$79.09 in Sydney Tuesday.
The BBSW is a benchmark used to set the price of Australian financial products such as bonds and loans.
Australia’s three other major banks — ANZ, Westpac and National Australia Bank (NAB) — have also been probed by ASIC over rate-rigging claims.
ANZ and NAB settled their cases before their trials began last October, with the banks paying A$50 million each in penalties.
Westpac’s case remains before the courts.
The ASIC action against CBA came a day after the firm appointed its retail banking chief Matt Comyn to replace Ian Narev as chief executive.
Narev was one of the casualties in the fallout following the AUSTRAC case, and had flagged his retirement by the end of the 2018 financial year.
The case also prompted other Australian regulators to launch inquiries into the bank over its handling of the alleged breaches.
The string of scandals engulfing the finance industry prompted Canberra to call a wide-ranging inquiry in November to restore faith in the massively profitable sector.
Leading local financial institutions had been under increased scrutiny in recent years amid allegations of dodgy financial advice and life insurance and mortgage fraud.
Scandals in recent years have also hit the sector globally, such as the rigging of the Libor (the London Interbank Offered Rate) interest rate and of foreign exchange rates.
US and British regulators have slapped major banks with billions of dollars in fines.

Recession is over for the richest few, while billions will live in poverty for at least a decade – Oxfam