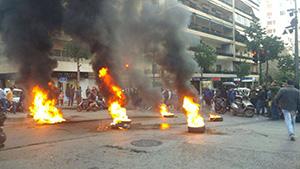 The video sparked outrage among supporters of the Amal Movement who took the streets to denounce Bassil’s remarks, blocking roads and burning tires across Lebanon.

“We are not among those demanding an apology from Minister Gebran Bassil but if he wishes to apologize, he should do so before the Lebanese and the world,” said Finance Minister Ali Hassan Khalil, Berri’s top political aide.

A statement released Monday by the Amal Movement also warned that Bassil’s remarks threatened the country’s unity, stability, and security.

Bassil’s remarks are a call “for strife that will destroy what was achieved in Lebanon,” the statement added.

The leaked video, which was broadcast by “Al Jadeed” local TV station on Sunday, sparked outrage among supporters of the Amal Movement who took to the streets on Monday to denounce Bassil’s remarks, blocking roads and burning tires across Lebanon.

The video sparked an outcry on social media late Sunday and prompted Khalil to describe Bassil in a tweet as a “political dwarf” with a sectarian agenda.

In the video, which was filmed while Bassil was meeting with FPM supporters in his home district, Batroun, the foreign minister accused Berri of seeking to derail a diaspora conference in Abidjan by forcing Shiite businessmen to boycott the gathering.

Bassil, President Michel Aoun’s son-in-law, said Berri threatened to have Shiite businessmen participating in the conference fired from their jobs and the bank funding the diaspora gathering closed.

In a longer audio recording of the meeting released Monday, Bassil tells one of his supporters that his party will emerge victorious from the ongoing dispute with Berri.

The rift between Berri and the FPM has deepened since Aoun, the FPM founder, signed a decree that grants a one-year seniority to army officers who graduated from the military academy in 1994.

The decree ultimately advances the ranks of mostly army officers who served under Aoun when he was army commander in the late 1980’s.

Berri says the implementation of the decree violated the Taif Accord, arguing that the Constitution requires the finance minister’s signature on any decree that entails spending.

Justice Minister Selim Jreissati, a member of Aoun’s party, on the other hand, argues that granting seniority to officers doesn’t entail spending before officers are promoted in rank, which then results in a pay increase.

The leaked video surfaced a day after the powerful Shiite militant group Hezbollah, an ally of both Aoun and Berri, mediated efforts to contain the crisis.

In a statement released on Monday, Hezbollah denounced Bassil’s comments, saying such remarks instigate divisions among the Lebanese.