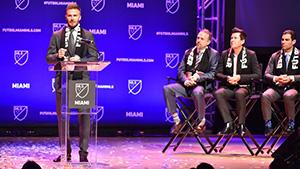 David Beckham believes his new Major League Soccer franchise will have the means to bring in some of the world’s top stars – but he insists he wants to give the “young kids of Miami” a chance too.

The former England captain took up the option to acquire an MLS expansion franchise at a discounted rate of 25million US dollars when he signed for the Los Angeles Galaxy in 2007.

Speaking at its official unveiling in Miami, he told Press Association Sport: “People all want to see these players play. You talk about Cristiano (Ronaldo), you talk about Zlatan (Ibrahimovic), you talk about (Lionel) Messi. Realistically, can we afford to bring in players like that, who knows?

“We have a lot of experience and owners that are very powerful in many different areas and obviously have the expertise.

“Do we have the means to bring in these players? Yes of course we do, but do we want to bring young talented players from Miami into this team? Of course, that’s our aim.”

He added: “This is now where the real work begins. We’ve done well to get to this point because there were certain moments where I didn’t think it was going to happen.

“The difference now is the league is a lot more stable than it was 15-20 years ago. I always knew that Miami was the right city. I said from day one this is where I want the team to be.

“People want to see players that have won everything in the game but the more interesting thing for us as an ownership group, and as a team, is to bring (through) the young kids of Miami.

“That will be the moment where we know we’ve succeeded, we want to build a state-of-the-art academy and give them the chance to be professional football players.”

MLS commissioner Don Garber announced the new franchise at the unveiling event in Miami, telling Press Association Sport: “This was just such an important day for the league and for the city of Miami.

“We’ve worked for so many years to finalise this opportunity.

“David Beckham, some great local partners, a stadium being built in the urban core – it’s an exciting opportunity for us.”

Garber stressed that the development of a Miami franchise was Beckham’s dream.

“David was presented with the opportunity in 2007,” he added. “It’s been many, many years that we’ve all been talking about trying to get to this moment.

“This was his plan and he worked hard through lots of trials and tribulations to get it done.”

Garber added: “I think the team needs to be connected in the community. It’s such an important, culturally rich city and a really culturally passionate region.

“He’s got to come up with that plan. Whether it’s the right combination of star players that might be experienced overseas, players that he might sign from South America in the middle of his roster or those players he might grow through their academy.

“That recipe has got to come together and it’s not easy in Major League Soccer to do that. But he’s a smart guy and they’ll hire smart people and I’m confident they’ll be able to pull it all together.”