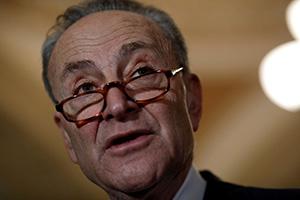 WASHINGTON (Reuters) – U.S. Senator Chuck Schumer has recommended that the White House nominate one of his top aides, Rebecca Slaughter, to the Federal Trade Commission, according to two sources with knowledge of the matter.

Schumer is the Senate Minority Leader and Slaughter is his chief counsel who has worked for him since 2009, according to her Linkedin page. She graduated from Yale Law School in 2008.

They are Republicans Joe Simons, Noah Phillips and Christine Wilson along with Democrat Rohit Chopra, a former official at the Consumer Financial Protection Board, to the FTC.

Simons was tapped to chair the commission.

A spokesman for Schumer declined comment when asked if he had recommended Slaughter for the FTC position.

The FTC works with the U.S. Justice Department to enforce antitrust law. The agency has five commissioners but only three can be from one political party.

The agency is currently headed by acting Chairwoman Maureen Ohlhausen, a Republican, with Democrat Terrell McSweeny the only other commissioner.

Ohlhausen has been nominated to be a judge on the U.S. Court of Federal Claims. McSweeny’s term ended last fall, but she has stayed on pending confirmation of a replacement.

The agency is reviewing a number of big mergers in industries where there are already few players.

One is a deal to merge industrial gases companies Praxair Inc and Linde AG. It will also decide whether lens maker Essilor International SA will be allowed to merge with dominant frame-maker Luxottica Group SpA.