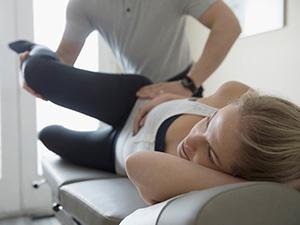 In March, I triggered some arthritis in my lower back after lifting too much weight overhead during the CrossFit Open. It was a familiar pain I’d experienced before, but never to this level. After two months of taking it easy and feeling no improvement, I went to a sports medicine doctor at the Hospital for Special Surgery in New York City. He ordered an X-ray, which showed no severe damage, so he suggested I visit a physical therapist. I was skeptical.

Here’s the thing: I’d been to physical therapists before. Always for different ailments, but always the same outcome. I’d fork over an exorbitant amount of money (sessions in New York City can run you around $150 each) to sit with a professional while they stretched me and showed me some “therapeutic” exercises that I’d argue I could’ve found myself on YouTube. After each appointment, I typically left feeling frustrated and like no progress had been made. Still, I was ready to do whatever it took to relieve my lower back pain, so I agreed to see the physical therapist that my doctor recommended.

I was hesitant as I walked into my new physical therapist’s office, ready for an hour of lackluster stretches that I already knew how to do. But as I told him my symptoms and he did an examination, I started feeling at ease. Within 10 minutes, he told me the same things my sports medicine doctor discussed with me about what the possible underlying issue of my pain was. OK, I thought. Maybe this guy knows what he’s talking about. But what happened next was what hooked me.

In the 45 minutes that followed, we did a whole bunch of stuff. Like physical therapists past, he suggested exercises to me that would strengthen my core—ultimately alleviating the pressure off my spine. Then we did instrument-assisted soft tissue mobilization (IASTM), a myofascial release method that involves scraping the affected area with something that resembles a blunt scalpel. We did kinesiotaping. We did electric muscle stimulation. I walked out of his office feeling better than I had in weeks. Whether my relief was at all attributed to a placebo effect was, to me, beside the point; I appreciated that my physical therapist was willing to try different methods on me, and I felt comfortable that he had the knowledge base needed to use these therapies on me in a targeted way. (Quick note: The above therapies and other emerging methods of treatment in physical therapy aren’t very well researched so far, and some studies have shown mixed or ineffective results. Like foam rolling, many of the successes are anecdotal, and well-designed studies are just starting to be done on these topics. Whether or not you decide to try a certain therapy is a decision you should make with your doctor or therapist after weighing the pros, cons, and price of each treatment.)

My physical therapist came as a recommendation from my sports medicine doctor—I’d previously always chosen one through a cursory Google search, but I didn’t know what to look for and what each certification after a therapist’s name actually meant. That’s because there used to be several ways to become a physical therapist, although the criteria has recently changed, says James J. Irrgang P.T., Ph.D., professor and chair of the department of physical therapy at University of Pittsburgh School of Health and Rehabilitation Sciences, tells SELF. “In the past, individuals could enter the profession with a bachelor’s or master’s degree; however, the standards for accreditation have changed and a D.P.T. degree is now required to become a physical therapist,” he says. That doesn’t necessarily mean that a P.T. without a doctorate doesn’t know their stuff—if they’re a licensed therapist, then they may have entered the profession before a doctorate was required, which arguably could mean that they’ve racked up a lot of important hands-on experience that many people would appreciate. And just like your other doctors, trainer, or any other certified professional, simply having a degree or certification or a long history working in a field doesn’t mean someone knows everything or that they’re the right fit for you.

Here are five more things that you should look for if you’re on the hunt for a good physical therapist.

You want to make sure that your physical therapist has your best interest in mind, and that involves using your time wisely. Upon stepping into the office for the first time, there should be a conversation about the patient’s goals in physical therapy. Then, establish a timeline reflective of those goals, Arsh S. Dhanota, M.D., sports medicine physician at University of Pennsylvania, tells SELF. “That timeline may be as short as six weeks, or even longer, like 12 weeks. Each subsequent visit, your P.T. should measure your progress toward reaching those goals. If you’re not making progress toward that goal, then you need to pivot.” Your doctor should recognize when it’s time to try something new, and come up with a new plan of action.

As I mentioned, before seeing the D.P.T. that changed my mind about physical therapy, I’d gone to a slew of duds who essentially provided me with an hour of facilitated stretching with little-to-no results. My suggestion: Find a facility that experiments with new equipment and strategies that make the most sense for your diagnosis, as well as a doctor who can demonstrate that they’re knowledgable about current studies on treatment options. “There is a great variability in the treatments that are provided by physical therapists, and they should be using the treatments that are best supported by the evidence,” says Irrgang. “It needs to be tailored to the patient.”

If you have an injury related to a specific sport, try to find a P.T. who has experience—or better, specializes—in that injury, suggests Heather Milton, M.S., senior exercise physiologist at NYU Langone’s Sports Performance Center. “Runners should try to see a physical therapist that specializes in runners or is a runner herself,” she tells SELF. “You want to be able to relate to one another.”

Next to education, this is of the utmost importance. You wouldn’t step foot in the office of an ob/gyn that you didn’t like or trust, right? The same thing should go for your P.T. If you’re going to be spending a lot of time with this person, and trusting them with getting your body working correctly again, then you want to make sure that the environment is one you feel safe in. Also of note: In my experience, treatment often involves wearing just a sports bra and shorts, so keep that in mind when you’re choosing a doctor if you know that’s something that would affect your decision.

Sure, it would be great if you could fix major ailments like a tweaked back or a twisted ankle with an hour’s worth of work each week. Unfortunately, it doesn’t work like that. Often times, physical therapist’s will require you to do a little bit of homework—a series of movements, like stretches—to further build on what you did at the office, so choose a P.T who gives you clear instructions and directions so you know exactly what you should be doing at home. “Successful physical therapy is a two-way street,” says Irrgang. “The physical therapist will do his or her part to help your recovery; however, it is also important for you to take an active role in your treatment by following the physical therapist’s recommendations.”