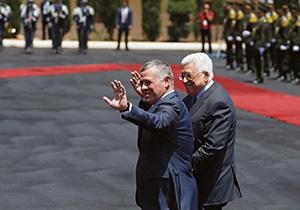 Since Trump announced his decisions on Jerusalem, Abbas has said the Palestinians will no longer participate in an American- dominated peace process.

In early December, Trump recognized Jerusalem as Israel’s capital and initiated the relocation the US Embassy in Tel Aviv to the city, breaking with decades of American foreign policy.

Since Trump announced his decisions on Jerusalem, Abbas has said the Palestinians will no longer participate in an American- dominated peace process and called for the establishment of a multilateral peace process to replace it.

Nabil Shaath, Abbas’s adviser for international affairs, has said that the Palestinians would like the EU, Russia, China and other actors to take part in such a multilateral framework.

Israel has said it will only work with a US-led peace process.

For his part, King Abdullah told the World Economic Forum in Davos last week that while he has “tremendous sympathy for what the Palestinians are feeling,” he thinks they should wait for the Trump administration to publicize its forthcoming peace plan.

White House officials have said they are drafting a plan to resolve the Israeli-Palestinian conflict and believe it will appeal to the Palestinians.

During their meeting on Monday, Abbas and Abdullah also spoke about “the necessity of the international community supporting” the UN Relief and Works Agency, the official Jordanian news agency Petra reported.

In mid-January, the US administration announced that it would deliver only $60 million of what was expected to be a $125 million contribution.