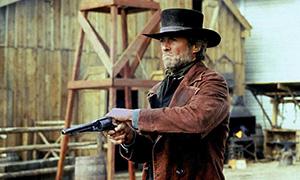 The Hollywood veteran’s stoic war films provide the same one-sided scenario every time, from American Sniper to 15:17 to Paris

There is no questioning the heroism of the three Americans, two of them off-duty soldiers, who foiled a terrorist attack on a Paris-bound train in 2015. There is a question, though, over whether we needed a movie about it. The answer could be summarised in two words: Clint Eastwood. With a career as long and lucrative as his, there is practically no one left in Hollywood who’d dare refuse him. The grizzled veteran can pretty much make whatever he wants – which is invariably a story of stoic, white, militaristic American masculinity saving the day.

It certainly saves the day on The 15:17 to Paris, in which the real-life Americans play themselves. It also did in Eastwood’s last movie, Sully, on the level-headed pilot behind the “miracle on the Hudson”. The one before that was American Sniper, following the Iraq tour of the US army’s most prolific and stoically manly sharpshooter.

But it is not just Eastwood. This has become a whole genre. They are always stories about “real-life heroes” and, therefore, not just some Hollywood action movie – though the purpose of these movies is to conflate the two. Achieving that often requires editing out all context. American Sniper, for instance, rarely looks up from its telescopic sights to ponder why this whole Iraq mess is happening in the first place. Nope, it’s just good guys and bad guys. If anyone had said, “perhaps we shouldn’t have invaded this country under false pretences and made a total mess of it,” the bubble would burst.

We’ve got another example this week: 12 Strong, produced by Jerry Bruckheimer. It ticks all the boxes: based on the true story of the crack special forces unit that paved the way for the invasion of Afghanistan, it stars Chris Hemsworth, Michael Shannon and Michael Peña. They’re heroes to a man and men to a fault. But again, the heroism loses its lustre when you realise these brave souls are basically paving the way for a massive US military-led omnishambles that’s far from resolved nearly two decades later.

We’ve also had Lone Survivor, an action-packed account of an anti-Taliban mission that went wrong. The synopsis calls it “one of the most valiant efforts of modern warfare”. Then there was Michael Bay’s 13 Hours, the story of the US forces who came to the rescue of besieged diplomats in Benghazi, Libya (the title alone speaks of the curtailed remit). The real-life combatants were heroic, but the movie functioned more as ammunition for the Republicans’ persecution of then-secretary of state Hillary Clinton, and did little to acknowledge any role the US might have had in Libya’s descent into chaos. Quite the opposite: in one scene, an American tells a Libyan man, “Your country’s gotta figure this shit out.”

It’s a similar scenario every time: eulogise the battle won and ignore the war lost. The intention is to project the US as the strong, dependable world policeman when in real life – especially given the present commander in chief – it’s more like Eastwood’s Dirty Harry: brutal, macho, not overly concerned with the rules, and overcompensating for something with its penchant for big guns.