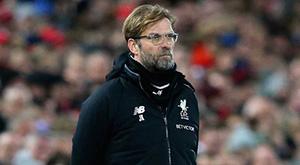 Liverpool goal scoring great John Aldridge has expressed a fear that financial firepower of the two Manchester clubs could ensure his old club are frozen out of the Premier League title race for the next decade and more.

Jurgen Klopp’s Reds gave up on their latest hope of ending the club’s 28-year wait for an English league title many months ago, as they fell behind runaway league leaders Manchester City and their local rivals Manchester United.

Now Aldridge has suggested Liverpool and the rest of the Premier League may be fighting a losing battle to keep pace with two of the biggest spending clubs in world football.

“Van Dijk was a big signing for Liverpool this month, but that one eye-catching deal is not enough to keep up with big spending Manchester City and their neighbours United.

“Not for the first time during Jurgen Klopp’s reign at Anfield, Liverpool look set to be in profit from player trading at the end of a transfer window and that is not what the fans want to see in this era of crazy spending.

“You look around the Premier League at Arsenal, Tottenham and Chelsea and they are not spending too much money, so the path is clear for City and United to dominate the English game for the next decade unless one of their rivals tries to stop them.

“Arsenal have tended to work to a tight budget under Arsene Wenger’s guidance in recent years, Tottenham are trying to fund their new stadium and don’t pay big wages to attract the top player and Roman Abramovich is clearly not going to put too much money into Chelsea’s transfer kitty any more.

“With all that in mind, Liverpool may be in the best place to stand up to the financial firepower from Manchester and now we wait to see if they will do that.”

Aldo suggests Liverpool’s owners will have questions to answer unless they start investing heavily in the transfer market in the next 12 months, as they look to finish this latest transfer window in profit on player trading once again.

“The £142m fee Liverpool got for selling Philippe Coutinho to Barcelona may have been good business, but the supporters expected that money to be reinvested on players who can take the club to the next level and end the club’s long wait for another league title,” he added.

“Naby Keita is arriving in the summer and Van Dijk has come in now, but those two deals have been completed in the knowledge that the Coutinho money was coming in from Barcelona.

“Klopp has stated that the Van Dijk and Keita transfers were not financed by the sale of his No.10, but the supporters will not be convinced by those words unless we see evidence of big name players arriving.”