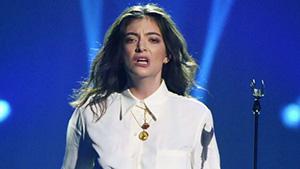 At last night’s Grammy awards Ella Yelich, also known as Lorde, was the only female to be nominated in the Album of the Year category for Melodrama.

This marked the first time since 1999 that the category for Album of the Year was completely bereft of white males. And yet. Lorde was the only artist in the category not offered a solo performance spot on the night, with Bruno Mars, Kendrick Lamar and Donald Glover (Jay Z declined) all performing their own tracks.

Recording Academy President Neil Portnow and Grammys executive producer Ken Ehrlich were pressed about the situation on the evening, with Ehrlich telling reporters,

“She had a great album, album of the year is a big honour, but there’s no way we can really deal with everybody.

“Sometimes people get left out that shouldn’t, but on the other hand, we did the best we can to make sure that it’s a representative and balanced show.”

Portnow, meanwhile, added simply, women need to “step up,” which seems like a cop-out given that U2, who were not nominated for a single award, were given three spots during the telecast, while host James Corden spent 157 minutes on screen.

Pink had words for Portnow the following day, tweeting “Women don’t need to step up”.

13 of 18 people on the Grammy board of directors are men. Its chairman, vice chair and CEO are all men. All 6 performers at the big citi pre-Grammy nominee events this week are men. Lorde was nominated for album of the year at the age of 20 and was not even invited to perform. pic.twitter.com/kGxGmh9rIs

#GRAMMYs Watch: Lorde is the only album of the year nominee who was not invited to perform a solo set. Sting got to perform twice, including a song from 1987. And James Corden has been onscreen 157 minutes. Expert opinion: This is messed up. pic.twitter.com/443Bf9qysc

While the music world donned white roses at the 2018 Grammys to signify the #MeToo movement, Lorde made her own statement, pinning an excerpt from feminist writer, Jenny Holzer Inflammatory Essays series to the back of her red Valentino dress.

It reads, “Rejoice! Our times are intolerable. Take coverage for the worst is a harbinger of the best. Only dire circumstance can precipitate the overthrow of oppressors. The old and corrupt must be laid to waste before the just can triumph. Contradiction will be heightened. The reckoning will be hastened by the staging of seed disturbances. The apocalypse will blossom.”

Last week Lorde’s mother, Sonja Yelich, tweeted a photo of a section of a New York Times‘ article with the caption “this says it all”.

The section reads: “Of the 899 people to be nominated for Grammy awards in the past six years, only nine per cent were women.”

this says it all [email protected] January 26, 2018 pic.twitter.com/R3YdHwieXf

The study Yelich referred to, which was conducted by Stacy L. Smith, an associate professor at the University of Southern California and the founder of its Annenberg Inclusion Initiative, proved that statistics around representation of women on charts and at awards show is grim.

And unfortunately the rest of the world follows suit.

It is easy to have a tainted perspective given that Adele, Beyonce, Taylor Swift and Rihanna have all dominated the show’s headlines as Grammy winners in recent years, but the reality is, most awards have large percentages of male nominees and thus winners.

According to the study from the 899 individuals who have been nominated during the last six Grammy awards, 90.7 per cent were men and 9.3 per cent were women who were more likely to appear in the Best New Artist category rather than in their genre category (three of the five this year were female).

Alessia Cara ,who took out Best New Artist, despite being in the industry a lot longer than the other nominees, and Rihanna were the only two female recipients during the main telecast, with not many more given in the pre-show. SZA, the most nominated woman of the evening, did not win a single Grammy because she was in genres dominated by males.

In the Best Pop Solo Category, four out of five nominees were women, yet Ed Sheeran’s Shape of You took out the award despite the British singer not being present.

Kesha’s Grammy loss in this category feels like a missed opportunity to stand in solidarity with sexual assault survivors, given she managed to release her latest album Rainbow despite a judge ruling she could not break from her contract with Kemosabe Records, the imprint led by Lukasz “Dr. Luke” Gottwald, the man she alleges sexually assaulted her.

Nearly two years after fighting institutionalised sexism in court and being silenced from recording new music, she stood on the stage and sang proudly in front of people who enabled the abuse within the industry. After the performance, Sony Global, who kept her locked in a contract with Dr Luke posted on Twitter, “No words, All Love,”. Many fans were quick to point out that industry giants must be held accountable to their actions. The tweet has since been deleted.

wait didn’t you guys play some role in tormenting kesha, like a big one https://t.co/fz709F1eCl

Australia isn’t trailing very far behind these dismal numbers. Last month, Camp Cope pointed out the lack of female performers on the bill of Falls Festival. The UK popular festival, Wireless has a similar discrepancy problem, with only three women out of 40 artists playing over the three day festival.

Wireless festival without the men is… not great pic.twitter.com/BrsxY7jYbi

“Female representation isn’t solely the responsibility of women” said Hellmrich. “I think people argue there’s not enough women in music and it’s really ignorant. They’ll look at those statistics and say, ‘there you go, there’s not as many women making music as men.

“What there is, is an industry that grinds away at the confidence of women and that can really deter them from making music or feeling like they can succeed.”

Pointing to research conducted into ‘the Confidence Gap’ between women and men in creative fields, Hellmrich believes it’s an issue that’s larger than the Hottest 100.

“It’s definitely a societal problem, not just music. It trickles down into music, it’s everywhere. We’re constantly asked what we can do and when we speak up about it, women are silenced in that way. Listen when women tell you there’s a problem.”

This year, 51 per cent of Triple J voters were women, yet the charts don’t reflect that balance. This is not to say men haven’t earned their place at the table, just that it’s time to allow other women opportunities to join them.

As Janelle Monae worded it while introducing Kesha, “We are also daughters, wives, sisters, mothers and human beings,” she continued. “We come in peace, but we mean business. And to those who would dare try to silence us, we offer two words: ‘Time’s up.'”

My version of a white rose — THE APOCALYPSE WILL BLOSSOM — an excerpt from the greatest of all time, jenny holzer