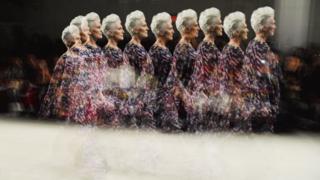 Youth is not everything – at least not 69-year-old model Maye Musk. But, as Alina Isachenka reports, is her success more than just a trend?

The recent “Spring 2018” shows in New York, Paris, Milan and London saw a record number of models in their 50s and 60s on the catwalk – 27, according to the industry’s forum, Fashion Spot.

Does this mean that the fashion industry is finally breaking with beauty stereotypes and becoming more age-diverse?

“I’ve never worked as much over the past 50 years as I did in 2017,” says 69-year-old model Maye Musk, mother of billionaire entrepreneur and Tesla founder Elon Musk.

Canadian-born Musk started modelling in South Africa at the age of 15, but it’s only in recent years that her career has picked up.

She also appeared on the covers of New York Magazine, Elle Canada and VOGUE Korea. And she starred as the oldest brand ambassador for American cosmetic company CoverGirl.

A fashionable grandmother of 10, Musk believes that allowing her hair to naturally whiten has helped her career. But being a successful model comes with certain challenges.

“I have to plan all my meals and snacks every day, or the wheels come off and I gain weight,” says Musk, a nutritionist with two master’s degrees.

“It then takes two weeks of being really strict to lose it. I’m a UK size 8, so not skinny.”

Debra Bourne, a director of All Walks Beyond the Catwalk – an initiative that aims to promote racial, age, size and body diversity in fashion – attributes much of the success of older women in modelling to social media.

“With the growth of social media through platforms like Instagram we have seen very successful examples of where elder models have created huge audiences themselves,” says Bourne, a psychotherapist and a former fashion editor.

This is certainly the case for Musk, who frequently posts photographs on Instagram where she has almost 90,000 followers.

“There is less competition when you’re older, but also less jobs,” says Musk. “If you keep on working and posting your work, you can build up a following.

“Also, you can be booked directly from your photos and don’t have to go to castings.”

With sweat and tears

“I think many designers believe the current focus on silver-haired models is merely a trend that will be over next year so they can return to tall, thin, young colts,” says Rebecca Valentine, founder of Grey Model Agency, which focuses on models aged 35+.

Launched in 2015 to ‘represent the new diverse older population’, London-based Grey Models works with clients such as London Fashion Week and Hunger fashion magazine, and represents models including Vivienne Westwood’s former muse Sara Stockbridge and 82-year-old Frances Dunscombe – one of the oldest models at the agency.

To Valentine, who is also an experienced photography agent, the emphasis on older models “is a response to market pressure where, for the first time, this aging group are refusing to sit down and shut up.”

“They are the generation of rebels, punks, rockers, rappers, gay-coming-outers after all, they are used to being listened to and when they are not they shout louder and demand more,” she explains.

She believes the industry is catching up with the trend, but admits the process remains challenging.

“They [older models] can see that this is a tough mountain to climb with much adversity, prejudice and tradition to fight.

“It is wonderful to be surrounded by such strength and positivity at work”, she adds.

But not all industry experts agree on the rise of older women in fashion.

Vincent Peter, co-founder of SILENT modelling agency in Paris, says: “You can see older women on an anti-ageing cream advertisement, but they are unlikely to be booked for high-fashion jobs.

“Occasionally they are on a catwalk but rather as an exception. I don’t see any trend here.”

While the fashion industry may hold on to its rigorous age frames, Musk continues to secure jobs worldwide and hopes to work well into her 70s and beyond.

“It’s been amazing to see how brands, magazines and designers are focusing on real stories from older women.

“Young models love to see me on a modelling job as it gives them hope for the future. My hashtag is #justgettingstarted.”