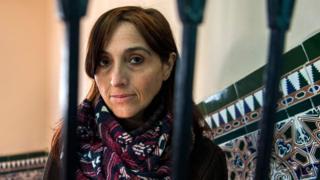 A Spanish woman has been credited with saving the lives of thousands of migrants crossing the Strait of Gibraltar to get to Europe. So why is she now facing a lengthy prison sentence?

When Helena Maleno gets the call, she does not think twice.

As soon as she has been told that a boat has set forth into the treacherous waters of the Strait of Gibraltar, she alerts the emergency services.

Based in Tangier for the past 16 years, Ms Maleno, who heads a non-governmental organisation called Walking Borders, monitors the movement of migrants and helps to call rescuers if they get into danger as they cross from Morocco to Spain.

Her actions have made her a heroine to thousands of African immigrants trying travel to Europe.

“I am not exaggerating when I say that she is probably the person who has saved most lives in the Strait – at least 10,000,” says Captain Miguel Zea, chief of the Maritime Rescue centre in the Spanish coastal city of Almería.

“She is providential for our work.”

But Ms Maleno’s activity on what she refers to as Europe’s “southern border” has also earned her enemies.

She now faces prosecution in Morocco for human trafficking, accused of working with criminal gangs to facilitate the illegal movement of people.

Speaking to the BBC ahead of a court appearance in Tangier on Wednesday, she denied this and insisted she had not committed any crime.

“We cannot create a precedent whereby those who protect people have police investigations mounted against them.

“We cannot open the door to the idea that people who call to save people from drowning at sea should be imprisoned. The crime would be to not make that phone call.”

More than 22,000 migrants made the dangerous sea crossing to Spain last year – the biggest number since more than 39,000 immigrants were picked up along the country’s coastline in 2006.

Some critics suspect that Ms Maleno has been helping migrants achieve their objective of reaching European soil.

In a previous court appearance in December, the judge asked her why she called the Spanish coastguard instead of the Moroccan authorities when she got news that a boat was on the water.

“Spain and Morocco co-operate on migration but the Spanish rescue services have more resources than the Moroccan navy,” Ms Maleno says.

“I know that as soon as I have called one police force, they will immediately inform the other country to tell them where the boat is located. The co-operation I offer is available to both countries.”

Despite the rise in the number of crossings, rescue services, with the help of Ms Maleno, have managed to keep the death rate at around 1%.

A total of 223 immigrants are believed to have perished on the Western Mediterranean route in 2017, according to the International Organization for Migration.

As part of Ms Maleno’s work, she facilitates the return of migrants’ remains to relatives on the other side of the Sahara.

“Some families cannot afford to have the body delivered,” she says.

“They say could you please grab a handful of dirt from the place and send it so we can carry out our mourning rituals? You end up sending earth by DHL.

“It might seem absurd, but the pain is so great. They need to have something.”

So Ms Maleno says she is horrified that her efforts have landed her in court in Tangier.

“I am in shock at how my life could be destroyed from one day to the next,” she says.

It was even more galling to find out that the Spanish police, whom she had worked with in the past, had sent a dossier on her activities to the Moroccan court, describing her as an “important international trafficker of immigrants”.

“I have talked to and even taught Spanish police agents in seminars about how to spot victims of trafficking for the sex trade,” she says. “Now I find out that this same force has been tapping my phone for the last five years.”

Ms Maleno’s legal advisers say that the same police complaint against her was not accepted by prosecutors in Spain.

Now the judge in Tangier will decide whether she should stand trial in Morocco instead.

“Clearly, I can’t have any faith in the Spanish police. I am abandoned by my state and on the other side are the mafia networks. I am in a limbo in which I feel completely unprotected.”

Her case has attracted the attention of more than 200 Spanish public figures including actor Javier Bardem, who have signed a petition in support for her.

Meanwhile, her network of contacts and supporters has continued to call on her – for many different reasons.

“Everyone has my phone number,” she says.

A note on terminology: The BBC uses the term migrant to refer to all people on the move who have yet to complete the legal process of claiming asylum. This group includes people fleeing war-torn countries such as Syria, who are likely to be granted refugee status, as well as people who are seeking jobs and better lives, who governments are likely to rule are economic migrants.