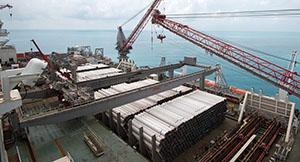 More than 50 percent of the construction pipeline that will supply Turkey with Russian natural gas under the Turkish Stream project has been completed.

The Turkish Stream project envisages the construction of two pipelines, each 939 kilometers long.

One of the two pipelines has already reached the Turkey-Russia Exclusive Economic Zone, while over 530 kilometers of pipes have been laid along the first string that will carry Russian natural gas to Turkey.

The first stream of gas is expected to flow through the pipeline in December 2019.

Two lines will have a total throughput capacity of 31.5 billion cubic meters of gas per year.

The Turkish Stream will deliver Russian natural gas across the Black Sea to Turkey and then onto Europe.

Natural gas extracted from Novy Urengoy in the Yamalo-Nenets autonomous region in Russia’s Siberia will feed the Turkish Stream pipeline. The field, operated by the Russian energy giant Gazprom, sits on an estimated natural gas reserve of 12 trillion cubic meters, the second largest in the world after Iran’s Southern Pars field.

Natural gas produced in the field is also transferred to Germany, Poland, Austria, Denmark, France, the United Kingdom and the Netherlands.