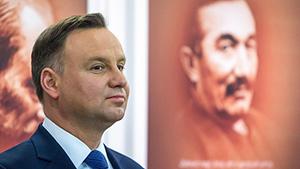 Acknowledging there were Poles who committed ‘evil’ acts against their Jewish neighbors, Polish President Andrzej Duda insists there was no Polish institutionalized participation in the Nazi regime’s ‘Final Solution.’

Poland’s president said Monday that there was no institutionalized participation by Poland or its people in the Holocaust, but acknowledges that individual Poles took “wicked” actions against Jewish neighbors.

President Andrzej Duda said that he would never allow Poland and Poles in general to be “vilified” though “false accusations.”

Duda seemed to be reacting to anger in Israel over a bill that would prohibit public statements assigning to “the Polish nation” responsibility for crimes committed by Nazi Germany during its World War II occupation of Poland.

Violations of the proposed law would be punishable by fines or prison terms of up to three years. A section of the bill exempts prohibited statements made “within artistic or scientific activity.”

Some six million Polish citizens, half of them Jews, died under the Nazi occupation of Poland. In Israel, the legislation has been interpreted as an attempt to undermine scholarly research and deny facts about the Holocaust.

Szczerski characterized the talk as “difficult and frank” and said he was critical of the reaction in Israel to the legislation approved by the lower house of Poland’s parliament Friday.

Speaking during a visit to the southern town of Zory on Monday, Duda said that referring to the camps built and operated by the Germans in occupied Poland as “Polish death camps” is an example of the kind of statements the law is meant to address.