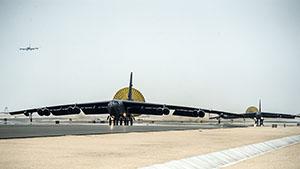 Qatar plans to add 200 more housing units to the Al-Udeid Air Base, crucial to the US-led counter-terrorist campaign, so that US troops deployed there on a permanent basis can feel “at home,” Qatar’s defense minister said.

Among far-reaching plans outlined by Khalid bin Mohammad Al Attiyah, Minister of State for Defense and Deputy Minister of Qatar, the Gulf kingdom is renovating its naval ports so that the US Navy can be deployed to the country in addition to some 10,000 US servicemen stationed at Al-Udeid air base near Doha.

To ensure the US troops lack nothing during their long-term deployment, Qatar “have decided immediately to build 200 units for the officers and officers’ families,” as well as a new school within the compound.

“It will very soon become a family-oriented place for our American friends there. We want more of the families to be stable and feel more comfortable in their stay,” Attiyah said, speaking at the discussion hosted by the US-think tank the Heritage Foundation on Sunday.

Calling Al-Udeid a “full city” in itself, the minister reiterated the Americans are always “welcome” in the country “regardless of what the region thinks.”

He also for the first time revealed a “big plan” by Qatar to “make Al-Udeid permanent.”

“Colleagues in the US Department of Defense are reluctant to mention the word permanent, but we are working from our side to make it permanent,” he stressed.

The minister estimated that “80 percent of aerial refueling in the region is from Udeid,” meaning that the bulk of the US airstrikes in Iraq and Syria would be impossible if not for Qatar’s cooperation.

“We’re the ones that keep your birds flying,” he noted.

The base has been home to the US Combined Air Operations Center for the Middle East since 2003 and has gained on importance for the US military since the launch of the US-led coalition campaign against Islamic State (IS, formerly ISIS/ISIL).

The ongoing strife between Qatar and its Gulf neighbors, including Saudi Arabia, Bahrain, the United Arab Emirates, Egypt and Yemen, which cut diplomatic ties with Qatar in June last year, accusing it of supporting terrorism, sparked concerns that the base could be caught in the diplomatic crosshairs. Despite US President Donald Trump escalating the row by, in turn, branding Qatar a “high-level sponsor of terrorism” at the onset of the crisis, the US and Qatari military did not cease cooperation and even called a joint exercise.

“Our missions out of Al Udeid Air Base are continuing and have not been impacted,” Pentagon spokesman Capt. Jeff Davis said at the time.

The Saudi-led block imposed a travel and economic blockade on Qatar and set a 13-point ultimatum with which Doha refused to comply, denouncing the allegations against it as “lies” and launching complaints to the World Trade Organization (WTO) over the boycott. The resulting stalemate forced Washington to halt some military exercises with Gulf countries in October.

According to Attiyah, it’s up to Trump to end the lingering conflict for which he needs only to pick up a phone and make a number of calls.

“At the moment, I think the only person who can solve the GCC crisis is President Trump. And I think he can solve it in a phone call,” the minister said, adding that although Qatar “can discuss anything,” it will not tolerate pre-conditions and will not give up its sovereignty.

“We’re tough people. We don’t accept pre-conditions. But at the same time, we’re very open to discuss issues that worry them,” he stressed, noting that the only beneficiaries of the crisis are actual terrorists. 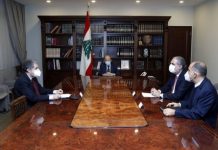