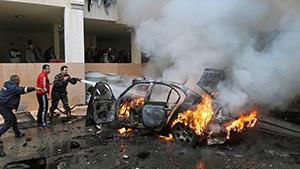 Lebanese investigators link attempted assassination of a Hamas member in Lebanon to foreign agents operated by Israel in cooperation with local operatives.

The attempted assassination of Hamas member Mohamed Hamdan in Lebanon has been attribued to Israel, which operated Israeli agents on Lebanese soil, the Hezbollah affiliated Lebanese daily Al-Akhbar reported.

The newspaper claimed that the investigation into the assassination attempt revealed that two Israeli operatives, a man and a woman, carried out the operation, unlike in previous cases in which local agents were recruited.

Hamdan, a member of Hamas also known as Abu Hamza and brother of Hamas’ top representative in Lebanon Osama Hamdan, was lightly wounded after a bomb planted in his car detonated in the southern city of Sidon earlier this month.

According to the report, it was the female agent who planted the explosive charge in Hamdan’s car, while the man was the one who activated it.

The newspaper noted that Lebanese intelligence discovered photographs of the two Israeli agents, as well as documents belonging to them.

Among the efforts made by the Lebanese were attempts to locate the local agents who cooperated with the Israelis. One of them was Mohammed H., who fled to Turkey after the assassination attempt, where he was captured by local security forces and later extradited to Lebanon.

In his interrogation, he claimed that he was Israeli and not Lebanese, and therefore objected to his extradition to Lebanon. However, an examination revealed that his Lebanese passport was authentic.

The investigation also revealed that another collaborator, identified as Mohammed B., had worked with Israeli officials for more than five years and had been on Hamdan’s tail for more than seven months. As part of the surveillance, he rented a warehouse near Hamdan’s house and placed surveillance cameras in several locations to track his activities.

According to intelligence sources in Lebanon, Israeli intelligence cleared the contents of the warehouse before the assassination attempt.

On the eve of the assassination attempt, Mohammed B. allegedly accompanied the female Israeli agent to Beirut. She then boarded a flight to Qatar, from which she was supposed to continue to a third country which was not determined in advance.

Muhammad B. returned to Sidon together with a foreign man, who reportedly waited near Hamdan’s car until the following day to activate the explosive device at the opportune time.

Hamdan, though, survived the explosion with only minor wounds.

The unidentified man then left Lebanon for France carrying Swedish-Iraqi citizenship. According to the investigations, the two agents acted separately.

Investigators in Lebanon are now looking into whether any others were involved in the assassination attempt.