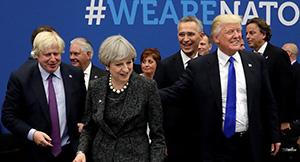 More than 20,000 people plan to protest outside the British prime minister’s office next fall, when US President Donald Trump is scheduled to pop into town for a state visit to the United Kingdom.

“It’s just been announced: Donald Trump is coming to Britain on a state visit later this year. We don’t know when. But let’s be ready — and be prepared to take the streets in the most incredible protest in our history,” page administrators Owen Jones and the Stop Trump advocacy group wrote. The tentative schedule of the protest is October 1-2.

In a recent interview, Trump told television personality Piers Morgan that he plans to visit England in October.

“I’ll be there. She [May] just invited me. Twice. State and working. One is a state, October,” Trump told Morgan, without offering specific dates.

According to British Labour Party Member of Parliament Emily Thornberry, Queen Elizabeth II would not be pleased by a state visit from Trump, Metro News reported.

In a recent interview on the BBC’s “Andrew Marr Show,” Thornberry said, “[Trump] is an asteroid of awfulness that has fallen on this world. I think he is a danger and I think that he is a racist. I don’t want him to come to the country. I don’t that he should have been given an invitation in the way that he was. It was wrong for Theresa May to so prematurely give him a state visit.”

“I think that it embarrasses the Queen. I think that it is humiliation for her. I think it is wrong to have brought her into this in this way. It is very difficult once an invitation for a state visit has been made to withdraw it. Only the Queen can withdraw it and I don’t want to put her in that embarrassing position,” she added.

Earlier this month, Trump canceled his trip to London for the opening of a new US embassy because it’s a “bad deal,” as he described it, and anyway the decision of his predecessor.

“Reason I canceled my trip to London is that I am not a big fan of the Obama administration having sold perhaps the best located and finest embassy in London for ‘peanuts,’ only to build a new one in an off location for 1.2 billion dollars. Bad deal. Wanted me to cut ribbon-NO!” Trump tweeted early January.