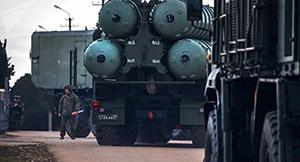 “There are concerns that it [deal] could trigger US sanctions in 2018 under the “Countering America’s Adversaries Through Sanctions Act” (CAATSA) which was signed into law in August 2017,” the report said on Monday.

In December, Russia and Turkey signed a loan agreement on the supply of Russia’s S-400 air defense missile systems to Turkey.

Plans by Moscow and Ankara to push ahead with the proposed Turkish Stream pipeline will increase Turkey’s dependence on Russia for its energy and will also run the risk of provoking US retaliatory sanctions, the report added.

“In 2017, over 50 percent of Turkey’s natural gas imports came from Russia… Despite Turkey’s desire to wean itself off Russian energy, progress on the Turk-Stream national pipeline will do the opposite in 2018 and could even trigger US sanctions, the report said.

Continued US support for the Kurdish People’s Protection Units (YPG) operating east of the Euphrates River in Syria with US support indicates that Washington and Ankara will experience continued tensions on the issue this year, the report added.