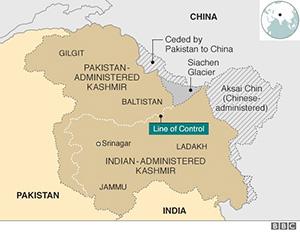 The fragile peace along the de facto border dividing India and Pakistan in Kashmir is crumbling.

The Line of Control (LoC) is an un-demarcated 776km (482 mile) stretch of frontier that snakes across the mountains of the northern Indian state of Jammu and Kashmir.

About 200,000 Indian and Pakistani soldiers face each other here, with rifles, machine guns, mortars and artillery at the ready. It is the most intensively manned and militarised border in the world.

Skirmishes between soldiers and artillery duels were a regular feature of the LoC until it fell silent in 2003, when former Indian prime minister, Atal Behari Vajpayee, and former president of Pakistan Pervez Musharraf agreed to an unwritten peace.

That ceasefire has come under growing pressure since 2013, when both sides resumed a deadly game of sneaking across the LoC, killing enemy soldiers and taking body parts for trophies.

India says that Pakistani soldiers violate the ceasefire to facilitate infiltration by separatist Kashmiri and Pakistani militants who cross the LoC in both directions – from the Indian side to get arms and training in Pakistan-controlled Kashmir; and back to the Indian side to fight security forces in the Kashmir valley.

To facilitate this infiltration, Pakistani soldiers open intense fire at Indian posts to keep soldiers’ heads down. That provides an opportunity for small groups of militants to thread their way across no-man’s land, scale a formidable Indian border fence and then cross through minefields laid between Indian posts.

The Indian Army says Pakistan violated the ceasefire 860 times in 2017, with December alone accounting for 147 violations, the most in any year since the November 2003 ceasefire. Firing has continued in the new year, with January seeing stepped up violations.

Ceasefire violations have doubled over previous years. India says there were 405 violations in 2015 and 449 in 2016.

Pakistan counters that Indian troops violated the ceasefire more than 1,900 times last year. It says there have been more than 75 violations this January alone.

It is hard to apportion responsibility for ceasefire violations.

Both sides say their troops encounter “unprovoked fire” which draws an “appropriate response”.

Since no impartial observers monitor the LoC in any serious way – the United Nations Military Observer Group in India and Pakistan (UNMOGIP) visits the LoC only occasionally, and never without warning – it is impossible to accurately verify claims.

In a departure from the norm, Indian army chief Bipin Rawat admitted on 12 January that Indian troops were violating the ceasefire to punish Pakistani posts for supporting infiltration by militants.

“Earlier, we were targeting only infiltrating militants [on the LoC]. But these extremists are disposable commodities for Pakistan. Instead, the pain has to be felt by the Pakistan armed forces for supporting infiltration. So we have started targeting (Pakistani) posts and I can assure you that, in these exchanges of fire, he has suffered three-four times the casualties. That is why we get repeated requests from Pakistan to take the ceasefire back to 2003 levels,” Gen Rawat told reporters.

Given India’s tough stance, there is little prospect of early de-escalation.

In early January, India’s army rebuffed a Pakistani request for the two directors general of military operations (DGMO) to meet and discuss de-escalation on the LoC.

While the DGMOs speak every week over a dedicated hotline, a meeting is a rare event directed at solving a serious problem.

The last DGMO meeting took place at Wagah on Christmas Eve 2013, and succeeded in de-escalating a similar rash of ceasefire violations that had flared on the LoC after Pakistani troops killed seven Indian soldiers and mutilated the bodies of two.

Since Pakistan is unlikely to completely block militant infiltration into Kashmir, low-level conflict could continue on the LoC.

Over decades, both armies have learned how to calibrate violence without letting it escalate into more serious fighting.

Since both sides occupy heavily defended positions, skirmishes invariably end in stalemates with no capture of significant territory by either side – which would be the only realistic trigger for an escalation of fighting.

India and Pakistan have fought three wars and a limited conflict – all but one were over Kashmir. The two countries formalised the ceasefire line as the Line of Control as part of a new resolve to negotiate differences after their 1971 war which ended in Bangladesh splitting from Pakistan.

A full peace, however, has proved elusive.

Ajai Shukla is a Delhi-based columnist on strategic affairs, defence and diplomacy