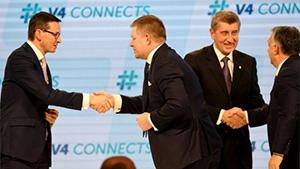 It’s not long ago that European know-it-alls, like myself, were debating the possibility of EU collapse.

After Brexit could come Nexit, Dexit and Frexit, we thought, as a wave of anti-establishment euroscepticism washed across the continent.

But shock at the ongoing political disorder in the UK following the Brexit vote, plus a sense of uncertainty in Europe provoked by the Trump presidency have served to solidify EU membership in most countries.

Now the battle is no longer about survival but over the direction the European Union should take. And in whose name.

The celebrated assumption in Brussels has been that Merkel and Macron, or M&M as I like to call them, would become the EU’s golden couple – breathing life back into the Franco-German motor of Europe, getting the engine of EU integration purring once again once troublesome Britain was out of the way.

But the spoke in the wheels of that EU motor-vehicle scenario comes from central Europe and the so-called Visegrad group of former communist states: Hungary, Poland, Slovakia and the Czech Republic. Otherwise known as the V4.

Hungary’s foreign minister once told me they see themselves as the “bad boys” of Europe. Pushing back against Brussels edicts, such as the migrant quotas.

Eurosceptic they are not. V4 economies have benefitted hugely from EU subsidies.

Brussels-sceptic would be a more accurate description. With a common, though varying degree of dislike for EU centralisation.

The Visegrad 4 certainly do not share the post World War Two vision of the EU espoused by mainstream decision-makers in western Europe, in countries like Germany, France and Italy.

The governments in Hungary and Poland have made front-page news over the last few months for thumbing their nose at EU laws, lectures and mores.

Their vision for Europe is one where the nation state is strong and independent.

Agoston Mraz, CEO of the Hungarian government-sponsored Nezopont Institute, told me fighting empires is a Hungarian tradition: First the Turks 500 years ago; then the Austrian Empire; followed by the Nazis and the communists in the 20th Century. Now, he said, they were resisting attempts to build a European empire.

He believes a clash of “euro visions” between the V4 and EU-integrationists is inevitable. And that the V4 view of Europe is catching on.

The EU certainly worries that the self-declared illiberal democracy of Hungary’s domestically popular Prime Minister, Victor Orban, is inspiring others.

First Poland and now Romania have recently been chastised by Brussels over attempts to compromise the independence of their judiciary.

Up the Danube in Vienna, meanwhile, the junior partner in the new coalition government, the infamously nationalist, eurosceptic FPO party, has called for Austria to join the Visegrad group.

Austria’s young and canny new Prime Minister, Sebastian Kurz, has eurocrats biting their nails. He’s been nicknamed “the joker” in the EU pack of cards.

A centre-right politician with a populist touch, no-one is quite sure where he’ll lay his EU hat.

His first official visits have been carefully chosen – ticking the boxes in traditional EU capitals Paris, Berlin and Brussels. But this week he’s invited Victor Orban to Vienna.

A meeting between “the EU’s most dangerous politician” (Mr Orban) and a leader “without scruples when it comes to power” (Mr Kurz), according to Hungarian-born Austrian author Paul Lendvai.

Ultimately, though, the EU vision division is no binary matter.

Look at Denmark, Sweden and the Netherlands and you’ll see there are nuanced positions between the Orban/Macron extremes.

As the UK exits the EU it leaves behind a gaping hole – not just in the EU budget – but also in terms of balance of power.

It’s not clear yet who will fill the vacuum – the federalists, the pragmatists or more nationalist-minded governments.

I watch this next EU chapter with interest.