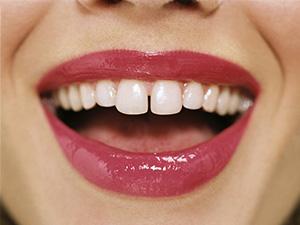 It’s time to talk about gum health, which may not seem like the most riveting topic at first, but I swear is actually pretty fascinating. Think about it: You use your mouth every single day, and you probably have no idea how healthy your gums really are.

A few tip-offs that your gums are in good shape: they’re light to medium pink (with the potential to be darker but still healthy based on your skin tone); they look and feel firm; they lie snugly against your teeth; spitting after you brush doesn’t remind you of The Shining’s elevator scene; flossing doesn’t feel so uncomfortable that you tell yourself you’ll just do it tomorrow; biting into ice cream doesn’t send twinges of pain through your body.

If you couldn’t say “yes” to all of the above, your gums might be in need of some TLC—and you’re not alone. According to the most recent data available from the Centers for Disease Control and Prevention (CDC), nearly half of adults 30 and over have some form of periodontal (gum) disease, which happens when bacteria infects the gums and bones that support the teeth.

Gum disease is no joke. When it gets severe enough, it can even lead to tooth loss.

“For the most part, gum disease creeps up on you over time,” periodontist Ari Moskowitz, D.M.D., tells SELF, explaining that people often attribute symptoms of unhealthy gums to other things, like flossing too hard. Here are signs your gums are unhealthy that you shouldn’t ignore:

The good news is that having gingivitis, the earliest stage of gum disease, is one of the few occasions in which you can turn back time. “It’s still a reversible situation,” Mazen Natour, D.M.D., a clinical assistant professor in the Ashman Department of Periodontology and Implant Dentistry at the New York University College of Dentistry, tells SELF. When gingivitis progresses into periodontitis, however, the bacteria spreads below the gum line and can even affect the bone, which may eventually lead to tooth loss.

Periodontitis can be mild, moderate, or severe, depending on how much bone loss there is. “Even if you restore it to a healthy situation, the bone you lost is gone forever,” Dr. Natour says.

If your gums seem to be fleeing away from your teeth, you may be stressed out or have sleep apnea.

Bruxism, aka grinding your teeth at night while you sleep, puts a lot of pressure on your gum line, teeth, and jawbones, which can ultimately lead to gum recession, Dr. Moskowitz says. This can make your teeth look longer than usual, and it can also lead to sensitivity if enough of the tooth gets exposed.

While grinding your teeth can happen due to health issues like anxiety and stress, it’s also commonly linked with sleep apnea. Sleep apnea happens when your throat muscles relax, which can block your airway and obstruct your breathing, and according to the National Sleep Foundation, nearly one in four people with obstructive sleep apnea grind their teeth while they sleep.

“It’s important to manage [bruxism] with a bite guard, which is a non-invasive way to protect people’s teeth from cracking. It allows people to continue to grind but not traumatize their teeth,” Dr. Moskowitz says. But, he notes, if your teeth grinding is related to sleep apnea, it’s key to address that, too. There are various forms of bite guards for bruxism, including some that are meant to alleviate sleep apnea—talk to your dentist or periodontist to figure out if one is right for you.

Also worth noting: If your gums are receding, you might just be using a toothbrush that’s too hard or too old, or brushing too intensely, Dr. Natour says. The American Dental Association (ADA) recommends replacing toothbrushes every three to four months (or if the bristles look frayed), and only using toothbrushes with soft bristles.

Sores on your gums could be an indication of herpes.

There are two strains of the virus that causes herpes: HSV-1 and HSV-2. While many people think only the former can cause oral outbreaks, known as cold sores, the latter can as well, according to the U.S. National Library of Medicine.

These painful sores often pop up on the border of the mouth where the lips meet the skin, according to the Mayo Clinic. But they can also break out inside the mouth, including on the gums, Dr. Moskowitz says. If that’s about to happen, you’ll likely feel some tingling, burning, or itching before the sores show up, then eventually you’ll spot the blisters. An outbreak can last for days, and it can take two to four weeks for the blisters to fully heal. If you think you have a herpes-related sore on your gums or elsewhere, get in touch with your doctor, who can prescribe you an antiviral drug to potentially accelerate your healing.

Pale gums could be a sign that you have anemia.

Healthy gums can be light to medium pink, or if you have dark skin, sometimes purple or brown. While deep, angry-looking pinks or reds can be cause for concern, so can colors on the other side of the spectrum. Super pale gums can be a sign of anemia, Dr. Moskowitz says. This blood disorder happens when your red blood cell count is low or you don’t have enough of the iron-rich protein hemoglobin, according to the National Heart, Lung, and Blood Institute. Hemoglobin is what gives blood its color, and without enough of it, you may notice paleness, including in your gums.

If you have pale gums and other symptoms of anemia, like fatigue and dizziness, you should bring it up with your doctor—especially because pale gums may be masking signs of gum disease, like redness, Dr. Moskowitz says.

Dry gums could be a symptom of immune system issues.

Sjogren’s syndrome is an autoimmune disorder, meaning it happens when your immune system mistakenly attacks your body, according to the Mayo Clinic. This condition affects the mucous membranes of your eyes and mouth, which can result in lowered levels of tears and saliva, leading to dry mouth, including your gums. When your gums are dry, it can contribute to or exacerbate gum disease, says Dr. Moskowitz.

Sjogren’s syndrome also often occurs alongside rheumatic diseases, like rheumatoid arthritis or lupus, says the Mayo Clinic. Of course, that’s not to say if you have inflammation in your gums you definitely have an autoimmune condition. But if you have gums that are dry enough to bother you, it’s definitely worth bringing up with your doctor or dentist.

In some people, gum disease and diabetes also share a link.

If you have uncontrolled diabetes, your body can have a tougher time cracking down on bacteria in the mouth, Dr. Moskowitz says. This can make gum disease more severe and take longer to heal, per the National Institute of Diabetes and Digestive and Kidney Diseases. Conversely, “Having a bacterial infection in your mouth can tax the body and make it harder to control diabetes,” Dr. Moskowitz says. If you have these conditions, it’s important to address both with your doctors instead of just one or the other.

There are a few potential health connections between your gums and the rest of your body that the jury’s still out on.

For example, a study in the August 2014 issue of the American Journal of Preventive Medicine studied insurance claims from 338,891 people who had evidence of periodontal disease and were diagnosed with at least one of five conditions, including heart disease. They found that when people’s periodontal disease was treated, they spent 41 percent less money on medical appointments related to heart disease. That doesn’t mean there’s causation at play, though. “[These results] cannot answer the crucial question of whether differences are caused by periodontal therapy or whether a patient’s completion of periodontal therapy arises from a complex of factors that tend to improve health outcomes irrespective of periodontal disease,” the study authors write.

There’s also some evidence that maternal gum disease could be associated with a risk of premature birth (giving birth at 37 weeks or earlier) and low birth weight (5.5 pounds or less), according to the CDC. Interestingly, that same American Journal of Preventive Medicine study also found that when pregnant women were treated for periodontal disease, their overall medical costs for treatment related to pregnancy and for supervision of high-risk pregnancy dropped by 74 percent. But, again, more research is necessary before the exact link or causation are established.

OK, freaked out enough? Here’s how to keep your teeth and gums healthy.

You should be brushing your teeth twice a day for two minutes with a soft-bristled toothbrush, per the ADA, which recommends flossing once a day as well.

And don’t put off those biannual teeth cleanings, no matter how much you hate them! “Even with good brushing and cleaning, you still have to come see the dentist periodically,” Dr. Natour says. These visits are essential for maintaining healthy teeth in general—but they’re also a key step in reversing any gingivitis you may have, or, if you have periodontitis, keeping your mouth in the best shape possible.