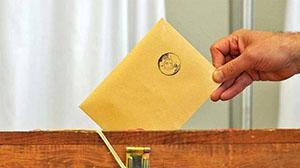 The ruling Justice and Development Party (AKP) and the Nationalist Movement Party (MHP) are not planning to decrease the current 10 percent national election threshold, the AKP’s spokesman has said, adding that modalities over the pre-election alliance are still being discussed between the two parties.

Ünal also informed that talks between the two parties for the formation of what they call a “National Alliance” are still ongoing. The two parties’ representatives have been negotiating over a number of legal changes on the Election Law and Political Parties Law as they need to be adjusted with the amended constitution from the 2017 referendum.

The AKP-MHP alliance could be possible after the latter’s chairman Devlet Bahçeli announced early January that his party would not present a candidate for the upcoming presidential elections and would instead support Erdoğan’s nomination. The two parties’ alliance for the parliamentary elections require a special adjustment to the laws as the current legislation does not allow for a pre-election partnership between the parties.

There are reports the MHP vote had been at risk of falling below the 10 percent threshold and thus, had lead it to opt to form an alliance with the AKP.