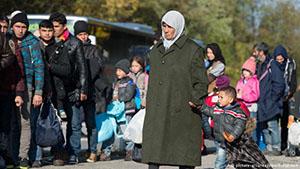 Angela Merkel’s CDU has agreed with potential partners the Social Democrats to set a monthly cap on refugee family reunions. The agreement removes a major obstacle in the grand coalition negotiations.

The conservative Christian Democratic Union (CDU) and the center-left Social Democratic Party (SPD) took one of the most difficult hurdles in the grand coalition negotiations on Tuesday, potentially clearing the way for Angela Merkel’s fourth term as chancellor.

In the now-formal coalition negotiations between Germany’s two biggest parties it was agreed that the number of reunions for refugee families would be capped at 1,000 a month — the same figure that was set out at the end of exploratory talks earlier this month — but that the current suspension on reunions would end on July 31.

However, it is not clear whether the deal includes exceptions for “extreme hardship cases” —  which would potentially soften the cap. Critics argue that this is a fairly cosmetic difference because, as refugee rights organization Pro Asyl pointed out, that exception has already been in place for the past two years, and was only invoked around 100 times last year.

But that didn’t stop the Social Democrats quickly claiming the deal as a victory. Party leader Martin Schulz said the agreement amounted to a “1,000+ regulation,” since the rules making exceptions on humanitarian grounds went “significantly further” than the initial coalition agreement.

SPD deputy parliamentary leader Eva Högl told reporters in Berlin that residence permits could still be granted on humanitarian grounds, and that, as of August 1, “family reunions for people with subsidiary protection will finally be allowed again.”

“Family reunion is important and right for all families — regardless of their protection status in Germany,” she added.

But the SPD account was immediately rejected by one of the more conservative negotiators on Merkel’s side — Alexander Dobrindt, parliamentary leader for the CDU’s Bavarian sister-party, the Christian Social Union (CSU). “With the new regulation, the claim to family reunion for people with subsidiary protection has finally been abolished,” he said in a statement. “That is a central building block for the limitation of immigration. There are no new regulations for cases of particular hardship.”

In a statement to the DPA news agency, Stegner went on to clarify that Tuesday’s deal was no more than an intermediary step, saying that a deal had indeed been reached on allowing family reunions for people with subsidiary protection, but what happens after August 1 “is the subject of the running coalition negotiations.”

Subsidiary protection is an intermediate status defined under European law, which “applies when neither refugee protection nor an entitlement to asylum can be granted and yet serious harm is threatened in the country of origin,” as the German federal refugee agency BAMF says on its website. Once granted, it entitles the asylum seeker to a one-year residence permit, which can be extended on reapplication, as well as the right to work.

The German government had suspended family reunions for refugees with subsidiary protection, but that suspension is due to expire on July 31. On Thursday, the German parliament will vote on whether to extend this suspension beyond that date.

Refugee rights organizations have consistently criticized the compromise between the two centrist parties, arguing that family reunion is vital for integration. In a statement released earlier this month, the NGO Pro Asyl argued that the right for families to live together was enshrined in the German constitution.

Many refugees with subsidiary protection have already been living in Germany for several years, and leading criminologists produced a study earlier this month arguing that family reunion functioned as a useful instrument in reducing crime among young migrants.

The coalition negotiations between the CDU, the CSU, and the SPD are freighted with plenty of other problems — especially health care reform, school funding, and pensions — but the question of family reunions has taken on a symbolic weight, because immigration has become a major media issue in Germany over the past two years.

In fact, family reunions make up only a fraction of the number of asylum seekers coming to Germany — around 60,000 people with subsidiary protection have actually applied for family reunion.

The leaders of all three parties — including Merkel, Schulz, and the CSU’s Horst Seehofer — are due to meet on Tuesday evening at SPD headquarters in Berlin.