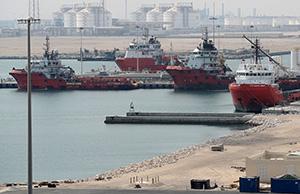 Oil exports from Qatar, one of OPEC’s smaller crude producers, to Japan last year slumped by almost a quarter to its lowest level since 1990, while shipments from giant supplier Saudi Arabia grew 8.1 percent, boosting its market share in the Asian nation to a record. Over in South Korea, imports from Qatar sank 26 percent to the least in seven years.

The diverging fortunes may be a reflection of Saudi Arabia’s strategy to retain market share in Asia, the world’s biggest oil-consuming region, while leading oil-production cuts by the Organization of Petroleum Exporting Countries to clear a global glut.

The Saudis have been making bigger supply curbs to the U.S. and Europe while largely sparing Asia from the reductions, as the kingdom sees better profits in the region. That’s enabling it to nudge out smaller rivals, according to the Japan Oil, Gas and Metals National Corp.

“Qatar is suffering from the repercussions of Saudi’s sales strategy,” Takayuki Nogami, the chief economist at state-backed Jogmec, said by phone. “With crude prices still much lower than its peak, losing its sales volume to Japan and South Korea is a double blow to Qatar.”

From Saudi Arabia, shipments to Japan rose 8.1 percent last year, while market share rose to a record 40.2 percent in 2017. South Korea’s crude imports from Saudi Arabia slipped 1.6 percent to 319 million barrels, down from the highest since at least 1980 the previous year.

— With assistance by Heesu Lee