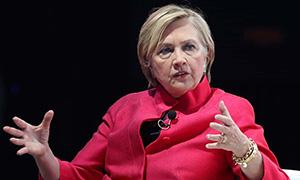 Ex-presidential candidate issues long statement about why she did not fire Burns Strider in 2008, saying she doesn’t always ‘get it right’

Hillary Clinton has said that given a second chance she would have fired a senior adviser accused of sexually harassing a staff member during the 2008 campaign.

Last week the New York Times reported that Clinton chose not to fire Burns Strider after the allegations were made, despite the recommendation of her campaign manager.

Instead, the NY Times reported that Strider, who was Clinton’s faith adviser, was docked several weeks of pay and ordered to undergo counselling, which he declined to attend. The Times said he was fired from a subsequent job for “workplace issues, including allegations that he harassed a young female aide”.

Following the NY Times report, Clinton had said she was “dismayed” by the sexual harassment accusations and that the situation had been “taken seriously and addressed” when he worked for her.

However, on Tuesday, the former presidential candidate issued a long statement saying that “the most important work of my life has been to support and empower women” and that not firing Strider had been a mistake.

“If I had to do it again, I wouldn’t,” she wrote on Facebook in a post that was shared more than 1,000 times in the first hour.

Clinton said she did not fire Strider at the time because she did not think it was the best solution and that she believed in second chances.

“He needed to be punished, change his behavior, and understand why his actions were wrong. The young woman needed to be able to thrive and feel safe. I thought both could happen without him losing his job. I believed the punishment was severe and the message to him unambiguous.”

However, when she learned that he had gone on to be accused of sexual harassment again, she said she was greatly troubled.

“Would he have done better – been better – if I had fired him? Would he have gotten that next job? There is no way I can go back 10 years and know the answers. But you can bet I’m asking myself these questions right now,” she wrote.

Clinton said female employers had an “extra responsibility” for looking out for women who work for them and that “even those of us who have spent much of our life thinking about gender issues and who have firsthand experiences of navigating a male-dominated industry or career may not always get it right”.

She said it had taken her so long to respond at length because “I’ve been grappling with this and thinking about how best to share my thoughts.”