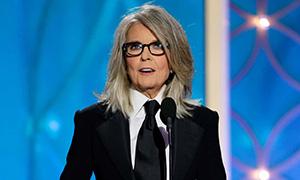 Actor takes to Twitter to share statement of support for the director, who has been accused of sexually assaulting his adopted daughter Dylan Farrow

Diane Keaton has spoken up in support of Woody Allen, stating that she believes the director’s defence against allegations of molestation made by his adopted daughter Dylan Farrow. Keaton, who worked with Allen on a number films including Annie Hall and Manhattan, defended the director on Twitter, sharing a TV interview in which Allen dismissed the claims made against him. “Woody Allen is my friend and I continue to believe him. It might be of interest to take a look at the 60 Minute interview from 1992 and see what you think,” she wrote.

Woody Allen is my friend and I continue to believe him. It might be of interest to take a look at the 60 Minute interview from 1992 and see what you think. https://t.co/QVQIUxImB1

The allegations against Allen first came to light during a custody battle between the director and his former partner Mia Farrow in the wake of the breakdown of their relationship after his 1991 affair with Farrow’s adopted daughter Soon-Yi Previn. They have resurfaced in recent months as part of a wider discussion about misconduct in Hollywood in the wake of the Harvey Weinstein scandal.

Earlier this month Dylan Farrow, who has accused Allen of sexually assaulting her when she was seven years old, made her first televised appearance to discuss the allegations, denying suggestions that she had been “coached” or “brainwashed” by her mother, Mia Farrow, into making the claims against her adopted father.

“What I don’t understand is how is this crazy story of me being brainwashed and coached more believable than what I’m saying about being sexually assaulted by my father?” she said.

Allen continues to deny the allegations made against him, and issued a statement in response to Dylan Farrow’s TV interview in which he noted that investigations by the Child Sexual Abuse Clinic of Yale New Haven Hospital and the Conneticut state prosecutor into the alleged incident had “concluded a quarter of a century ago”.

Following the re-emergence of the claims against Allen, a number of actors have spoken of their regret over working with the director, with Rebecca Hall and Timothée Chalamet donating their salaries from appearances in Allen’s next film, A Rainy Day in New York, to charity, and Colin Firth, who starred in Allen’s 2013 comedy Magic in the Moonlight, vowing never to appear in another of his films.

However, not all of the film-maker’s former co-workers have spoken out against him. Keaton’s defence of Allen follows a similar show of support by Alec Baldwin, who tweeted that it was “unfair and sad” that others had distanced themselves from the director. In a later tweet (since deleted), Baldwin compared Farrow to Mayella Ewell, the character from Harper Lee’s novel To Kill a Mockingbird who falsely accuses an African American man of rape.

Responding to the tweet in the Hollywood Reporter, Dylan Farrow noted that Baldwin had “invoked Mayella Ewell to make his point while forgetting that it’s been hotly debated that she was, in fact, raped by her father”.