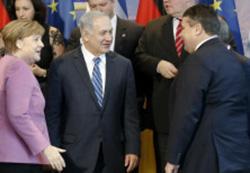 Sigmar Gabriel does not have a meeting with Breaking the Silence on his agenda this trip.

Prime Minister Benjamin Netanyahu is scheduled to meet on Wednesday with visiting German Foreign Minister Sigmar Gabriel, whom he refused to meet last April because of Gabriel’s insistence on meeting the far-left NGO Breaking the Silence.

Gabriel arrived in Israel on Tuesday evening for a one-night visit. In addition to meeting Netanyahu, he is scheduled to travel to Ramallah to meet with Palestinian Authority President Mahmoud Abbas, and deliver a speech at the INSS annual conference taking place in Tel Aviv.

Since the incident in April, Netanyahu and Gabriel have only spoken briefly on the phone once, when Netanyahu called both him and German Chancellor Angela Merkel in October to thank them for Berlin’s decision to go ahead with the sale of three submarines to Israel.

Gabriel does not have Breaking the Silence on his agenda this trip.

Gabriel triggered a diplomatic incident on his maiden visit to Israel as foreign minister in April by insisting on the Breaking the Silence meeting , even though it was made clear to him that if the meeting took place his planned meeting with Netanyahu would be canceled. The two men did not meet, and Gabriel then refused to take a phone call from the prime minister.

The German media reported that Gabriel defended his actions on Monday, the eve of his current trip, saying that “both Mr. Netanyahu and I are convinced that we did everything right on the last visit.”

He acknowledged, however, that some who applauded his position did so not because he was a strong foreign minister who was not intimidated, but rather because they hid “an antisemitic position behind their anti-Israel position.”

It is considered unlikely that Gabriel will continue in his current role once a new government is formed in Germany, and his meeting with Netanyahu is seen as an effort to “clear the air” before he steps down.

Netanyahu explained his decision not to meet Gabriel last year by saying at the time that his policy is clear: “Not to meet with diplomats who visit Israel and engage with organizations that slander Israeli soldiers and seek to have them put on trial as war criminals. Those same diplomats would not dream of doing such a thing in the United State or in Britain, or anywhere else.”

Gabriel raised more eyebrows last month at a meeting to combat antisemitism in Berlin with Muslim migrants. When the issue of criticism of Israel came up, he said that a visit he made to Hebron in 2012 reminded him of “what was seen during apartheid.”

He has not yet dialed back that comment, which was applauded by Hamas, which wrote on its official English Twitter account: “German FM describes the Israeli occupation as an apartheid regime like the one was in South Africa.”