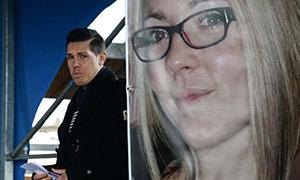 The husband of a woman who was found burned and strangled near her usual jogging route in eastern France has confessed to killing her, a defence lawyer says.

Daval reported her missing on 28 October, telling police she had not returned from a job. Her body was found two days later.

The killing prompted marches and memorial runs in Alexia Duval’s honour. In November, Jonathann Daval appeared distraught and in tears while reading a tribute to his wife at one such event.