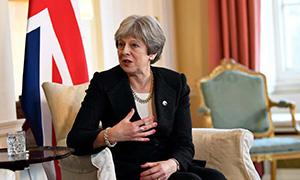 Theresa May has faced down her backbench critics as she landed in China, insisting she would fight the next election but admitting she needs to communicate better with both her MPs and the public.

Beginning her three-day trade visit, the prime minister repeated she was “not a quitter” and said the next election would not be until 2022, as disquiet mounted back in Westminster from backbench Brexiters as well as more liberal Tories who have said they want to see more bold policymaking on issues such as housing, education and the health service.

“There’s always more for us to be able to do to talk to people about what we’re achieving,” May told reporters on board her RAF Voyager plane to Wuhan, her first stop for her first bilateral visit to the country. “Yes, we need to ensure that we do speak about the achievements that we’ve seen.”

The prime minister insisted her administration had been bold and making progress, citing the rise in the numbers of first-time buyers, GDP growth for five years and the narrowing of the attainment gap between rich and poor students.

“This is as a result of decisions the Conservatives have taken in government and we will continue to do that alongside delivering the best Brexit deal for Britain,” she said.

May said she considered the prospect of a leadership contest “a hypothetical situation” which she would not indulge. “We are in government. The next general election is not until 2022,” she said. “What we’re doing now is doing the job that the British people asked the government to do which is to deliver on Brexit.”

However, she said she respected the Conservative party leadership rules, where backbench MPs can write private letters to the chair of the 1922 committee to express no confidence in her leadership. An automatic leadership challenge is triggered should the letters reach 48, or 15% of the parliamentary party, but May will be unaware of the number until the critical mass is breached.

“It’s a matter for the Conservative party, it’s always been written by the [backbench] 1922 [Committee]” she said. “They went through a long process in terms of writing those leadership rules.”

Former ministers and influential backbenchers including Nick Boles and the chair of the education select committee Robert Halfon have been among the moderates in the party who have broken cover to call for bolder leadership over the past fortnight. Last week, Halfon said he feared policymaking was more akin to a tortoise than a lion, but the prime minister told reporters she would not compare herself to either animal in her approach.

“I have never tried to compare myself to any animal, or bird or car or whatever sort of comparisons that sometimes people use,” she said.

“I am doing what I believe to be important for the sake of the country which is actually being out here and doing this work in terms of trade deal and at the same time obviously as we’re doing all the other things necessary for the future of the country.”

May struck a firm note as she departed for China, cautioning the UK and China will “not always see eye-to-eye” and hinting she had sympathies with US president Donald Trump’s approach, as Washington suggested it could no longer tolerate China’s unfair trade practices including intellectual property infringements.

May said the objective of the visit was not only to lay the groundwork for a future trade deal but to enhance the trading relationship in the interim. “China is a country that we want to do a trade deal with,” she said. “But I think that there is more we can be doing in the interim… doing right now in terms of looking at potential barriers to trade and the opening up of markets to ensure, obviously, British businesses are able to do good trade into China.”

Beijing is keen to see a full-throated endorsement by the UK of President Xi Jinping’s $900bn “Belt and Road” global infrastructure project, which the US, France and other European powers have expressed strong reservations about, given its political objective to tie other countries in the region closer into China’s influence.

En route to Wuhan, May hinted she had reservations. “What I would like to see is to ensure there is transparency and international standards being adhered to and that’s something I’ll be discussing with my Chinese interlocutors,” she said.

May will meet the Chinese premier, Li Keqiang, in Beijing later on Wednesday and dine with Xi on Thursday. Their talks, expected to cover international security and North Korea, also come amid growing concern over the deteriorating democratic situation in Hong Kong and the human rights crackdown in mainland China.

The prime minister told reporters she intended to raise both issues in her meeting with China’s leaders, though declined to give specifics. “We believe that the future of Hong Kong should be a one country, two systems future and we are committed to that.

“I’ve raised this in the past with President Xi and he’s shown commitment to that, but I will continue to raise it with him. That’s the basis of the relationship, that we are able to raise those issues.”