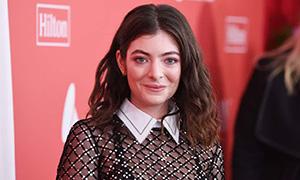 After being overlooked at the awards, the New Zealand star thanks supporters for ‘believing in female musicians’

New Zealand singer Lorde has taken out a full-page advert in her home country’s largest newspaper thanking readers for “believing in female musicians” after she was overlooked at this week’s Grammys awards.

Full-page letter from @lorde in today’s @nzherald: ‘Thank you, also, for believing in female musicians’ pic.twitter.com/Z86VXCCpvl

The singer has found herself at the centre of a debate over female representation in music after she, as the only woman on the album of the year shortlist, was also the only nominee not asked to perform solo on the night. She was reportedly invited to join a tribute to the late Tom Petty, which she is thought to have declined.

In the ad, she seemed to address the issue, saying: “Thank you, also, for believing in female musicians. You set a beautiful precedent!”

The ad came after she tweeted on Tuesday that people should see for themselves if they were unsure whether she could “murder a stage”.

IF YOU’RE DEBATING WHETHER OR NOT I CAN MURDER A STAGE… COME SEE IT FOR URSELF ?https://t.co/BeS8VYTynn

On the night of the ceremony, she wore an excerpt of an essay by feminist artist Jenny Holzer, which discusses “the overthrow of the oppressors”.

Grammy’s producer Ken Ehrlich said of the decision not to have the only female album of the year nominee perform: “We have a box and it gets full. She had a great album. There’s no way we can really deal with everybody.” Meanwhile, Sting and Shaggy performed two songs from their forthcoming collaborative album.

Discontent around the gender imbalance gave rise to the hashtag #GrammysSoMale, which began circulating during the ceremony. The Recording Academy president, Neil Portnow, prompted further fury when he said women needed “to step up” if they wanted more equal representation, adding that he had no personal experience of the obstacles faced by women.

Singer Sheryl Crow said Portnow’s comments were a “strangely insensitive thing to say, particularly at this juncture of women standing up for themselves” and asked “[w]ho will young girls be inspired by to pick up a guitar and rock when most every category is filled with men?”

Entertainment business manager Lou M Taylor, who counts Jennifer Lopez and Britney Spears among her clients, said in an Instagram post: “There are countless women who help provide the foundation that this business is built on.” Taylor said she knew a good woman “who can ‘step up’ and … help you pull your head out of your ass”.