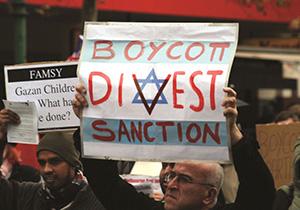 If the bill passes into law, Ireland would become the first EU country to take such a step.

Israel summoned Irish Ambassador Alison Kelly for a meeting on Wednesday over a bill making its way through her country’s Senate to criminalize trade with Israeli firms in the West Bank, east Jerusalem and the Golan Heights.

“Prime Minister Benjamin Netanyahu strongly condemns the Irish legislative initiative, the entire goal of which is to support the BDS movement and harm the State of Israel,” his office said on Tuesday.

“The initiative gives backing to those who seek to boycott Israel and completely contravenes the guiding principles of free trade and justice,” it added.

“Netanyahu instructed that the Irish Ambassador to Israel be summoned to the Foreign Ministry on this matter,” his office said.

Put forward by Sen. Frances Black (Independent), the bill would prohibit trade with “occupied territories” and impose a prison sentence of one to five years for such activity.

The text doesn’t specify Israel, but it was drafted with an eye to taking action against Israeli activity over the pre-1967 lines. All the comments in Tuesday’s Senate debate focused on Israel.

If the bill becomes law, Ireland would be the first European Union country to criminalize trade with Israeli companies located over the pre-1967 armistice lines.

Irish Foreign Minister Simon Coveney told the Senate that the government did not support the bill, and at his request, further debate on the matter was delayed until no later than July.

“The minister has asked today for time… He has given a commitment in writing that if the debate is adjourned today the government will facilitate time for this debate to be resumed before the summer recess in July,” Sen. Alice Mary Higgins, also an Independent, told the legislature.

Coveney told the lawmakers, “This bill does not propose a boycott of Israel,” adding that successive Irish governments have opposed such a move.

Ireland has serious concerns about human rights issues in many countries, “but we do not prevent trade with those countries,” he said.

Ireland has supported action that differentiates between settlements and Israel within the pre-1967 lines, he said.

The bill would be difficult to implement because Ireland’s international trade is governed by EU common commercial policy, Coveney said. It could also make it difficult for Ireland to have an impact on the peace process, something that Coveney said he considers a foreign policy priority.

“Ireland can be a positive influence by engaging directly with the parties, and that means by engaging with both parties in a constructive and direct and open way,” he said.

Ireland would do better to work together with the EU toward a two-state solution, he said.

Black told the parliament that Israeli settlement of the West Bank, east Jerusalem and the Golan Heights is a “war crime.”

This legislation, she said, is similar to the European Union’s guidelines for countries that want to label such products. But those guidelines are nonbinding and do not prohibit the import of goods produced over the pre-1967 lines into Ireland.

Sen. David Norris, also an Independent, said he supports Israel within the pre-1967 lines. He blamed the emigration from the former Soviet Union for destroying the country’s character.

“One need not be antisemitic to be anti-Zionist,” he said.

Ireland must not wait for the European Union to take action on the issue of settlements, he said.

“Do not wait for a unified European Union situation, you will never get it. The Germans and the Dutch are against [it],” Norris said.

“The Germans oppose it because of the Holocaust,” Norris said, adding that one “should not use the Holocaust as a political weapon.”

Higgins said that Ireland had a responsibility to take a leadership role in the EU by pushing for a new strategy.

“Progress will not come by waiting for a magical consensus to arrive. It will only come by showing leadership,” she said.