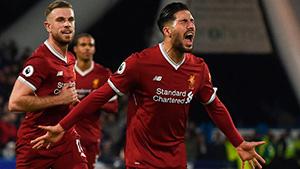 Review and updated odds from Tuesday night’s action in the Premier League.

Swansea climbed out of the Premier League relegation zone for the first time in three months as Petr Cech’s dreadful clanger helped condemn Arsenal to a 3-1 defeat at the Liberty Stadium.

Clucas netted his second goal three minutes from time to finish off Arsenal, who hope to add to their squad before Wednesday night’s transfer deadline with Pierre-Emerick Aubameyang set to swell their striking options.

The Gunners’ defeat was good news for Liverpool, who strolled to the easiest of 3-0 wins away to a below-par Huddersfield.

Jurgen Klopp’s men dominated possession against their opponents and from the moment Emre Can rocketed home a long-range opener in the 26th minute the result was never in doubt.

Roberto Firmino extended Liverpool’s lead on the stroke of half-time when he somehow squeezed the ball home from the goal-line after being played in by a clever Sadio Mane back-heel.

Klopp had left £75m man Virgil van Dijk on the bench but the decision was rendered almost irrelevant as the hosts continued in cruise control, Mohamed Salah completing the scoring from the penalty spot after Can was tripped up in the box.

A Mark Noble penalty helped West Ham shrug off the disappointment of their FA Cup defeat at Wigan with a hard-fought 1-1 draw against Crystal Palace.

But the Hammers were level just before the break after Javier Hernandez was brought down by James Tomkins in the box – and Hernandez came closest to a winner when his 51st-minute effort was brilliantly saved by Wayne Hennessey.