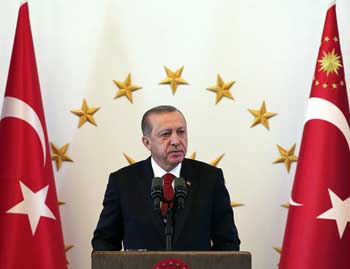 President Recep Tayyip Erdoğan announced on Jan. 30 that he had postponed a scheduled trip to Latin American countries.

Erdoğan was supposed to visit Venezuela, Brazil and Uruguay to discuss economic cooperation a week after visiting the Vatican on Feb. 5.

The Turkish President is reportedly set to visit only the Vatican and Italy in this round.

The announcement comes after Turkey launched a massive military operation against the Syrian Kurdish Peoples’ Protection Units (YPG) in Afrin on Jan. 20, vowing to expand operations to the Manbij area of Syria, where YPG troops and U.S. forces are located.

On Jan. 16, the Sabah newspaper reported that President Recep Tayyip Erdoğan would visit the Vatican on Feb. 5 upon the invitation of Pope Francis and thank the religious leader for his support regarding Jerusalem.

Pope Francis had voiced opposition to the U.S.’s unilateral decision to recognize Jerusalem as the “undivided” capital of Israel. He also supported Turkey-sponsored initiatives to nix the U.S. bid at the U.N. General Assembly.

Erdoğan and the Pope spoke a number of times on the phone in early December, with the former inviting the pontiff to attend an extraordinary summit of the Organization of the Islamic Conference (OIC) held in Istanbul amid the Jerusalem crisis.

Sabah reported that in the meeting Erdoğan plans to underline the need to protect Jerusalem as “the holy city of three divine religions” and will ask for continued support from the Holy See as the representative of the Christian world. The two leaders will also discuss developments in Iraq and Syria, as well as ongoing migration flows.

Pope Francis made an official visit to Ankara in late 2014, becoming the first international guest of the massive presidential complex in Ankara. Erdoğan’s trip to the Vatican marks a return visit to the Holy See.