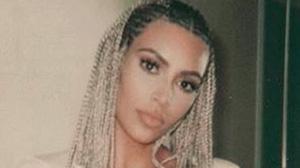 On Monday Kim Kardashian West posted half a dozen photos of herself to Instagram, wearing braids, a white g-string, and not much else. The six different photos showed Kim in various states of undress, including one where she opened a fur coat to reveal herself naked from the waist up.

At which point, the internet lost its collective mind.

First, there was outcry over her nipple, which, in deference to Instagram rules, was carefully pixilated.

Then, there were protestations over her reference to her new hairstyle as “Bo Derek braids”. Bo Derek wore the famous braids in the 1978 movie, 10, where she romped on a beach, virtually naked with Dudley Moore. The only problem is .. well, actually, there are numerous problems with that movie, but that’s a conversation for another article. The problem of today is that Bo Derek is white, and these particular braids, like so much of what Kim appropriates, is traditionally African American. More than a few Twitter users accused her of trolling black women. So there’s that.

Then, she got into a spat with Lindsay Lohan. After Kim debuted the hairstyle on her Instagram story, Lohan commented underneath, saying “I am confused” to which Kim shot back, “@lindsaylohan you know what’s confusing….your sudden foreign accent”.

But what we really want to ask, is why Kim posted the six photos of herself in various states of undress in the first place. Hear us out. We know Kim Kardashian West is no stranger to the semi-nude selfie. We know she has worked very hard for her body and we know that her physicality is a big part of her success.

But, what we really want to know, is why now?

Is this a diversion tactic, because Kylie is due any day?

Is this a mother of three showing her 106 million followers she still has it? (As if there was ever any doubt). Just on that topic, TV host Wendy Williams, a woman known for speaking her mind, publicly condemned Kardashian West saying “It is clear that Kanye does not pay attention to you. It’s clear to me that you’re desperately trying to stay in the spotlight.” The only slight problem is that, uh, Kim, never really left the spotlight, so Williams might be off-base there. More to the point, anyone who slams Kardashian-West publicly, might be on the wrong end of an argument about wanting to stay relevant.

Is this about a new line of underwear? Is Kim Kardashian West single-handedly bringing back the most uncomfortable undies for women since the girdle? Will everyone now rush out to buy white g-strings?

Or is this all part of the promotion for her new fragrance, Bae? Kim has run into a bit of resistance with her fragrances in the past. First off, there is in fact no way to smell a perfume via the internet, which has disappointed fans. Then, the shipping costs were a problem, given that they were almost the same price as the perfumes. So, what’s a reality TV show entrepreneur got to do? Well, maybe she has to go topless?

Final question: Kim Kardashian West is worth an estimated US 85 million dollars. Why then, is she always having these portraits done in such ordinary-looking places? The background looks like an AirBNB gone wrong: grubby walls, tacky mirrors, a bed with no discernable doona. We understand that sometimes, all you wanna do is pop on a g-string, a white midriff top and drive to the nearest seedy motel to make some seriously sensual performance art with a 1988 camcorder and a whole lot of room serviced food. We understand ambience, OK?

But, we feel we have to ask, on behalf of discerning KKW fans everywhere: is this poverty tourism?

And did we just join the latest fad of getting mad at the woman making more money than all of us combined?