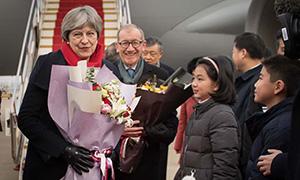 Tom Phillips in Beijing and Jessica Elgot in Wuhan

Theresa May has insisted she will raise human rights and Hong Kong’s political situation with China’s leaders this week, amid criticism of Britain’s “pusillanimous” response to Beijing’s increasingly hard line.

Addressing reporters as she flew out to start a three-city tour of China, the British prime minister, who will dine with President Xi Jinping on Thursday, vowed to broach both politically sensitive issues.

“We believe that the future of Hong Kong should be a ‘one country, two systems’ future and we are committed to that,” said May, referring to the formula that guaranteed the former colony’s political freedoms after handover in 1997.

“I’ve raised this in the past with President Xi and he’s shown commitment to that, but I will continue to raise it with him. That’s the basis of the relationship, that we are able to raise those issues,” May added.

May’s visit comes amid growing international concern over the erosion of Hong Kong’s political freedoms and the human rights situation in China’s authoritarian mainland, where Xi has overseen a crackdown some call its worst since 1989.

Joshua Wong, Hong Kong’s most prominent pro-democracy youth leader, urged May to confront Xi over his “relentless crackdown” in the former colony. “Theresa May should speak out on Hong Kong during her visit to China instead of having an empty talk with Emperor Xi,” Wong said on Wednesday, as May landed in Wuhan.

David Mepham, Human Rights Watch’s UK director, also urged May to stand up to Xi over the “alarming deterioration in human rights conditions” during his first five-year term.

Mepham pointed to a long-list of violations since Xi took power in 2012: the round-up, arrest and torture of human rights lawyers and activists; increasingly Orwellian internet controls; political interference in Hong Kong; and the transformation of swaths of west China into a high-tech surveillance laboratory.

“Of course, May should discuss trade, investment, climate change, North Korea and a range of other geopolitical issues with Xi,” Mepham said in a statement. “[But] she should not remain silent when rights are being trampled underfoot by the Chinese government.”

Despite her pledge to raise Hong Kong and human rights, few expect May to publicly challenge Xi on either issue. British officials are dismissive of the value of “megaphone diplomacy” and argue raising individual cases behind closed doors is more effective.

Beijing will also give short shrift to any criticism, public or private. On Monday, a foreign ministry spokeswoman indicated the shape of future UK-China relations depended on May’s adherence to the party line. “As to whether China and Britain have become the closest partners, we may need to wait and see how prime minister May’s visit this time plays out,” Hua Chunying told a press briefing.

In an editorial marking May’s arrival, the party-run news agency, Xinhua, warned: “May’s China trip, with a forward-looking spirit, can help usher in a new phase of ‘Golden Era’ … However, trust is hard earned and can be lost quite easily.”

The Global Times, a party-run tabloid, pilloried Hong Kong’s last governor, Lord Patten, for urging May to raise the former colony’s plight. Patten was part of “a group of contemptible and disgusting English clowns” trying to disrupt May’s visit.

Steve Tsang, the head of the School of Oriental and African Studies’ China Institute, predicted human rights and Hong Kong would rank low on May’s agenda.

“[Beijing] would not tolerate that … The Chinese government’s position is very clear. It’s very hard to see the prime minister and her advisers advising her to pay the price and stand up against that.”