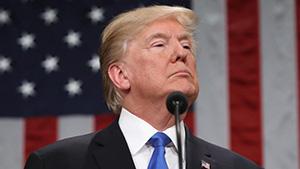 Analysis: The US president sees foreign aid as an investment which should yield a good return; since the rationale for aiding the Palestinians is the existence of a peace process, and the Palestinians are refusing to negotiate, the justification for helping them has been dropped. This approach, however, could challenge Israel too.

When US President Donald Trump withheld $65 million from the United Nations Relief and Welfare Agency (UNRWA) and threatened on the sidelines of the World Economic Forum in Davos to pull aid to the Palestinians if they fail to resume peace negotiations with Israel, he redefined the aid rationale.

It’s the rationale of a businessman, which also matches his approach to diplomacy as president. Trump, after all, wants to achieve the “ultimate deal” between Israel and the Palestinians. A “deal,” not a peace agreement, thereby adding a “business approach” to the existing approaches to foreign aid: The strategic approach and the humanitarian approach.

World powers like the United States, Russia and China provide aid primarily as a way to implement strategic interests. During the Cold War, the US used foreign aid to support allies—like Israel—that were dealing with Soviet pressure. The Soviet Union did the same with its own allies, like Cuba. The US gave Israel and Egypt extensive aid to support the negotiations between them and preserve the peace agreements they had signed. This rationale continues to this very day. The military aid to Israel is given also in order to help it deal with any hostile regional coalition.

The rich countries in Western Europe and Scandinavia provide aid primarily for humanitarian reasons. They give donations without expecting anything in return. This aid is also rendered to poor and undeveloped countries, mainly in a bid to reduce the gaps between those countries and the rich world. Some of the rich countries dedicate a fixed percentage of their GDP to such humanitarian aid.

Since the signing of the Oslo Agreement, the Palestinians have received billions of dollars from the United States and Europe. The American aid is given mainly for strategic reasons, similar to the reasons behind the aid that was given to Egypt: Reinforcing and maintaining the peace process with Israel. The European aid is given mainly for humanitarian reasons, stemming from a feeling that the Palestinians are poor, miserable and depressed and need help.

When you give humanitarian aid, you don’t check what it is used for. So Europe avoided inquiring about the reasons for the Palestinian distress, like Hamas’ huge investments of hundreds of millions of dollars a year in the production of rockets and construction of attack tunnels at the expense of Gaza’s poor residents. No one checked how money from these humanitarian donations went to the Palestinian leaders’ private and secret bank accounts. Europe started asking questions only after receiving proof that the Palestinian Authority was using donations to pay respectable salaries to terrorists who had been convicted and jailed in Israel and to build public institutions and name them after terrorists.

In recent years, the US has been giving the PA some $500 million a year and giving UNWRA $250-400 million. Trump sees this aid as an investment which should yield a good return. Since the rationale for aiding the Palestinians is the existence of a peace process, and the Palestinians are refusing to negotiate, and since they held the same stance during most of Barack Obama’s years in office, the justification for helping them has been dropped. Trump was also offended by the Palestinian boycott of Vice President Mike Pence’s visit and the insults hurled at him by Palestinian President Mahmoud Abbas and his people.

Trump’s business approach could challenge Israel too. Part of the American aid is dedicated to the training and maintenance of the Palestinians’ security apparatuses. Freezing the aid could sabotage the PA’s security cooperation with Israel, worsen the humanitarian crisis in Gaza and perhaps even lead to a new wave of violence.

The US gives Israel about $3 billion a year in military aid. Trump said Israel would have to give something in return for his Jerusalem announcement and make significant concessions as part of a peace agreement. The business principle will provide him with a heavy leverage of pressure on Prime Minister Benjamin Netanyahu when he presents his “ultimate deal.”

Prof. Eytan Gilboa is the director of the Center for International Communication at Bar-Ilan University and a senior research fellow at the Begin-Sadat Center for Strategic Studies.