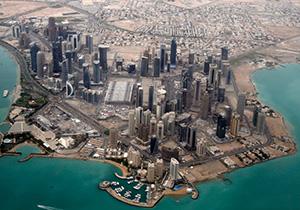 The Qataris said that if the US demanded they throw out Hamas members, then they would “throw them out in a minute.”

Zionist Organization of America President Mort Klein’s visit to Qatar this month became the latest in a long list of prominent figures from the pro-Israel community in the US who have gone to Doha.

Klein said in an interview with The Jerusalem Post that he was asked several times since September 2017 to go to Qatar. “I was worried they could simply try to use my going there as president of the ZOA for propaganda purposes,” so he says he refused. But after he saw Martin Oliner, president of the Religious Zionists of America; Menachem Genack of the Orthodox Union’s Kashrut Division; Jack Rosen of the American Jewish Congress; and others going, Klein says he didn’t see anything negative in traveling as well. Israel has a cold peace with Jordan and Egypt, perhaps Qatar-Israel relations could move in a new direction.

Twenty years ago Klein went to Qatar when there was an Israeli trade office in Doha. Then, relations were looking better.

“Before I went [this time] my staff researched every issue thoroughly and we put together a 50-page report.”

It included details on the Israelis held in Gaza, and alleged terrorism financing. When he met with Emir Sheikh Tamim bin Hamad al-Thani for two hours, Klein presented the report.

“I made the strongest case… I was respectful but tough, very tough.” Qatar’s leader listened as he criticized them for anti-Israel speeches and for their stance on Jerusalem.

The ZOA president stayed for five days and had meetings wall to wall every day except for Shabbat.

Although the emirate paid expenses for travel, he says there was no other financial incentive. However, the Qataris did ask him to meet with members of Congress. Klein says he won’t do that until there is real change. A junior official even hinted that a meeting could be arranged with Hamas’s Khaled Mashaal. The Qataris also said that if the US demanded the emirate throw out the Hamas members, then they would “throw them out in a minute.”

He met with numerous government officials, and Qatar’s leaders said although they used to fund the Muslim Brotherhood, they claimed that they no longer do this. “They want to be part of the civilized world.”

On Tuesday, Qatar’s Foreign Minister Muhammad al-Thani was in the US to attend a strategic dialogue with Secretary of State Rex Tillerson.

Klein says the Qataris told him any money going to Gaza goes into a special account that is monitored so it doesn’t end up with Hamas. The conversations give Klein confidence but he is concerned they are only happening because Qatar has been isolated since last July when Saudi Arabia, the UAE and other states cut connections with it, accusing Qatar of supporting Hamas, Hezbollah and threatening stability in the region.

“When that [the blockade] ends will they go back to what they were. I said I have to see they are doing this [change] for a year before my organization feels this is real.”