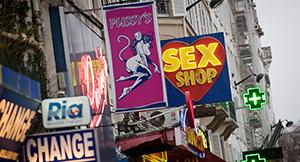 While French laws forbid paying for sex with prostitutes, they say nothing about renting a silicone doll for the same purposes, and a new secretive bordello made a move to capitalize on this loophole.

The XDolls brothel that recently started operating in the French capital invites its clientele to fulfill their carnal fantasies using (literally) three silicone dolls (Lily, Sofia, and Kim), according to the Local.

The establishment is operating in secret as its official website doesn’t even provide the brothel’s actual address, except for offering a vague statement about it being located “somewhere in the 14th arrondissement” of Paris.

In order to learn the location of this clandestine ‘silicone cathouse’, a customer would have to first pay for a session with one of the dolls which cost 89 euros for one hour and 149 euros for two hours.

In 2016 France passed a law that makes the buying of sexual services illegal and punishable with a fine up to 3,750 euros. However, the law does not mention anything about a paid intercourse with a silicone doll, so it appears that the new bordello may be exploiting this loophole.

Last year a similar establishment called Bordoll opened in the German city of Dortmund, becoming the first of its kind in the country. According to its madam, “dolls are ideal employees… because they’re never sick, they always look good, and they offer all three holes with no complaints or extra charges.”

The first sex doll brothel in Europe opened in Barcelona in March 2017.