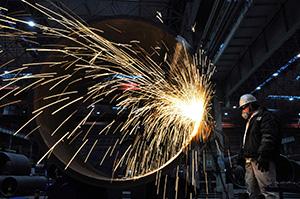 The Caixin/Markit Manufacturing Purchasing Managers’ Index (PMI) was at 51.5 in January, unchanged from the previous month. Analysts surveyed by Reuters had forecast a drop to 51.3.

December’s reading was the highest in four months and above the 50-point mark that separates growth from contraction.

Growth in factory output quickened to a 13-month high in January, and employment fell at its slowest pace in nearly three years.

The solid Caixin PMI readings could help reassure international investors that China’s economy is still expanding at a healthy clip as it nurtures new drivers of growth.

The Chinese economy slowed slightly in the second half of last year from the first half amid a government crackdown on air pollution, a cooling property market and higher borrowing costs.

Analysts expect some softening in economic expansion early this year after a forecast-beating 6.9 percent growth in 2017, the first annual acceleration in seven years.

An official survey released on Wednesday on manufacturing activity in January pointed to a slight loss of momentum.

“The downward pressure on the economy in the first quarter could be slightly bigger than the fourth quarter (last year),” said Wang Jun, chief economist at Zhongyuan Bank in Beijing.

“We expect first-quarter GDP growth to be around 6.7 percent.”

Analysts say the divergence between the official and Caixin findings is mostly due to margins of error in the survey resulting from different sample sizes and calculation methods.

The Caixin survey also tends to focus on small and mid-sized firms, which are believed to be more export-oriented.

“The manufacturing industry had a good start to 2018. Going forward, we should keep a close eye on the stability of the demand side,” Zhengsheng Zhong, director of macroeconomic analysis at CEBM Group, wrote in a note accompanying the Caixin release.

Input cost inflation eased to a five-month low in January, the survey shows, allaying concerns that broader inflationary pressures may intensify in China this year.

New orders and new export orders, while higher, rose at a slower pace.

Dimming the outlook for exports, Chen Zhongtao, an official with the China Federation of Logistics & Purchasing, said on Wednesday the yuan’s recent appreciation has led to a decline in big exporters’ manufacturing activities in January.

The Chinese currency gained around 3.4 percent in January, its biggest monthly gain versus the dollar since 1994.

Overall, analysts say China is having some success in transforming its economy to a services-driven one, without dealing a huge blow to its manufacturing industry.

Growth in China’s services industry picked up in January, a separate official PMI of the services sector showed on Wednesday.

In the fourth quarter of last year, growth in services, which accounts for over half of China’s economy, expanded.

Of note, the tech sector, while accounting for just 3 percent of gross domestic product, sustained its double-digit growth.