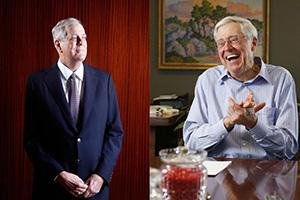 During his State of the Union address on Tuesday, President Donald Trump urged Congress to pass a bill that would allow terminally ill patients to request access to experimental drugs not approved by the Food and Drug Administration.

“We also believe that patients with terminal conditions, terminal illness, should have access to experimental treatment immediately that could potentially save their lives,” Trump said.

“People who are terminally ill should not have to go from country to country to seek a cure. I want to give them a chance right here at home,” he continued. “It’s time for Congress to give these wonderful, incredible Americans the ‘right to try.’”

Thirty-eight states already have so-called right-to-try laws on the books, but proponents say that a federal law is necessary to prevent any attempt from the federal government to override state regulations. The Senate passed a right-to-try bill in a 94-1 vote last year, and the White House is now pushing the House to pass a similar version.

But critics charge that the right-to-try laws—intensely lobbied and campaigned for by Vice President Mike Pence and wealthy libertarian conservatives such as Charles and David Koch—are meant to weaken drug regulations and will ultimately endanger patients’ lives and pocketbooks.

“It can’t be stated too often: The goal of right-to-try is not to help terminally ill patients. It’s to diminish and weaken the FDA. That’s why this latest push to pass federal right-to-try legislation needs to be stopped,” Dr. David Gorski, a surgical oncologist at the Barbara Ann Karmanos Cancer Institute and a professor of surgery and oncology at Wayne State University School of Medicine, wrote in a blog post last week.

Currently, the FDA approves 99 percent of all requests made by terminally ill patients for expanded treatment beyond FDA-approved options. The agency oversees the treatment and uses the results to judge the efficacy and safety of the experimental drugs.

Right-to-try laws take out these regulatory processes and allow patients with irreversible terminal illnesses who have tried FDA-approved treatments to petition for any medication that has passed the first of three clinical trial phases the FDA uses to screen drugs before they hit the market.

But critics charge that Phase I is too low of a threshold, as “most of the drugs that succeed in Phase 1 trials turn out to be too unsafe or ineffective for clinical use,” according to a report in The Journal of the American Medical Association published January 22. Furthermore, more than two-thirds of tested drugs fail the FDA’s second and third rounds of screening.

“A terminally ill patient could easily go bankrupt before he dies, and many couldn’t access experimental therapeutics through such laws in any event because they simply don’t have the money or the fundraising wherewithal to do so,” he wrote.

Right-to-try laws also limit what patients can do in the event of malpractice or negligence. As noted by Jann Bellamy, co-founder of the Society for Science-Based Medicine, right-to-try laws immunize physicians administering unapproved medications and the companies behind the drugs and treatment.

Under current FDA regulations, patients can sue for malpractice, and their cases are monitored by an institutional review board. All current right-to-try laws don’t have that oversight.

The federal right-to-try bill sitting before the House maintains all of these deregulatory components. It also bars the FDA from using reported outcomes from patients using experimental drugs.

“That means that if a patient uses an experimental drug under right-to-try and suffers a serious adverse reaction, the FDA cannot consider that reaction in its deliberations over approval of the drug,” Gorski wrote. “[Even] if a patient death is clearly due to use of an experimental drug under right-to-try, that death cannot be considered by the FDA in deciding whether to approve the drug.”

Proponents of right-to-try laws argue that the federal process to get experimental treatment approved is onerous and bureaucratic, leaving patients to die or explore treatment options in other countries.

“FDA’s objectivity, expertise, and knowledge of all the various drugs in development can help patients determine their best options. FDA’s review and its ability to require changes to treatment plans help physicians design treatment plans most likely to help, and not hurt, patients,” the bulletin stated.

“[Right-to-try laws] could place drugs for which there is very little safety or efficacy data in the hands of doctors who are not familiar with drug development or experimental drugs. Thus, despite their best intentions, doctors may have insufficient know-how to help—and not hurt—their patients,” the bulletin said.

For doctors Steven Joffe and Holly Fernandez Lynch from the University of Pennsylvania Perelman School of Medicine, some of the concerns raised by critics over a federal right-to-life law are “overstated.”

Still, Joffe and Lynch believe that a federal right-to-try bill would bring into question the FDA’s role as a whole and possibly undermine its mission to protect Americans from harmful drugs.

“If a federal right-to-try bill becomes law, the long-standing principle that broad access to medical products should await evidence of safety and efficacy will contend with the principle that patients with life-threatening diseases should have unfettered access to agents that have passed a bare minimum of safety testing,” the duo wrote in an article for The New England Journal of Medicine.

“Are we prepared to abandon the FDA’s gatekeeping role in favor of unfettered patient autonomy and market forces, risking precisely the problems that prompted Congress to grant the FDA its present authority?” they asked.

In October, FDA Commissioner Scott Gottlieb urged the Senate to amend its version of the bill to narrow the scope of eligible patients and to maintain the FDA’s oversight power over treatments. Gottlieb also noted that a federal right-to-try bill might not convince companies to make experimental drugs available to patients.

“The most common obstacle to access to the investigational product is the willingness or ability of companies to provide it. Neither FDA nor physicians or patients can compel a company to make a product available—and companies may decline requests for a variety of reasons,” Gottlieb declared in his written testimony before the House’s Energy and Commerce Committee.

The House bill is awaiting passage by the Energy and Commerce Committee. In an emailed statement, committee Chairman Greg Walden said the committee “continues to engage with patients, members and advocates to advance fair policy that helps patients understand the full benefit of access to investigational drugs and therapies.”

“While we don’t have a scheduling announcement at this time, Chairman Walden looks forward to continuing to work with the administration to get these reforms over the finish line for patients,” the statement concluded.

Many high-profile conservative and libertarian political donors are behind the right-to-try movement’s growing visibility.

Earlier this month, Freedom Partners, in conjunction with Americans for Prosperity—two libertarian groups funded in part by billionaire brothers Charles and David Koch—began a nationwide campaign targeted at federal legislators to convince them to pass a federal right-to-try bill.

The campaign has a lobbying and social media wing, and it also sent a letter to Walden urging him to prioritize getting the bill out of committee and onto the House floor for a full vote.

“Congress is on the cusp of delivering real hope to millions of Americans who are desperately looking for potentially life-saving treatment that is just out of their reach,” the letter stated. “Acting on Right to Try legislation could make all the difference.”

Freedom Partners’s campaign builds on work done by the Goldwater Institute, another libertarian advocacy group, to get right-to-try legislation before state lawmakers over the past five years. Both organizations insist that they want to expand choices for patients whose lives are on the line.

“Congress is at the one-yard line of approving this common-sense legislation that will make it easier for terminally ill patients to access increased medication and treatment options that could make a difference. The last step is to move the legislation out of committee and it will pass,” Freedom Partners Executive Vice President Nathan Nascimento said in a statement.

For Gorski, however, these groups want to do more than just try to help terminally ill patients.