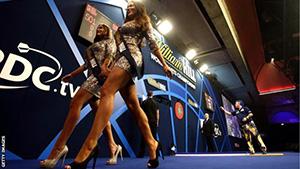 Walk-on girls will no longer be used by the Professional Darts Corporation (PDC) after talks with broadcasters.

The long-established practice of women escorting male players to the stage will be abandoned, starting with this weekend’s Masters in Milton Keynes.

World number one Michael van Gerwen has said the tradition should end.

But walk-on girl Charlotte Wood, who says darts accounts for 60 per cent of her income, says her rights “are being taken away”.

“We regularly review all aspects of our events and this move has been made following feedback from our host broadcasters,” said a PDC spokesperson.

Wood, speaking to BBC Radio 5 live, said: “Everybody chooses to do a job, and I feel like if I’m being told I can’t do this job, then my rights are being taken away.

“I have chosen to do this job. I go to work, I put on a nice dress and I escort darts players on to the stage. I smile and that is it. I don’t honestly see what the problem is.

“Where do we stop with this? I would be immensely proud if I had a daughter [doing the job of a walk-on girl].”

Former world champion Raymond van Barneveld is supporting an online petition to reinstate the walk-on girls. As of Saturday evening, nearly 15,000 people had signed the appeal.

“I will really miss the girls!! For me they are a part of the darts,” Dutchman Van Barneveld wrote on Twitter.

The Women’s Sport Trust tweeted: “We applaud the Professional Darts Corporation moving with the times and deciding to no longer use walk-on-girls. Motor racing, boxing and cycling… your move.”

Formula 1’s new owners said in December that they are looking into whether the sport should continue to use ‘grid girls’.