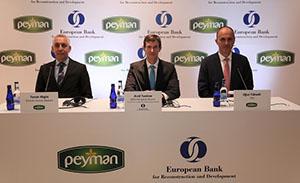 The European Bank for Reconstruction and Development (EBRD) has offered a 32 million euro loan to Peyman, a Turkish producer of dried fruit, nuts, seeds and popcorn, for a new plant in the Central Anatolian province of Eskişehir.

In a statement published on Jan. 30, the EBRD said the company, owned by Bridgepoint, a major international private equity fund, is building a new production facility in Eskişehir’s industrial zone.

The EBRD loan, with 10 million euro syndicated to FMO, the Dutch Development Bank, will finance the investment program, according to the statement.

The new 59,000 square-meter plant will become operational in the first half of 2018 and by 2023 it will have doubled the company’s production capacity to 45,000 tons, read the statement.

The new facility will apply high standards and the best available techniques, enabling Peyman to increase exports to the European Union, it added.

The EBRD loan will also finance Peyman’s day-to-day operations such as buying fruit, nuts and seeds from local farmers, storing, processing, drying and packaging the produce.

“As part of a new supplier-development program, Peyman will start buying part of its raw materials directly from farmers. This will enable the company to secure sustainable, higher-quality products from local markets,” the EBRD also stated.

With help from the EBRD and in cooperation with Turkish universities and vocational schools, the company is planning to train 300 farmers, including women, and the training program will include growing techniques, sustainable agriculture principles and systems to determine the origin of produce, the bank added.

Peyman serves its Turkish consumers through an extensive sales network ranging from national supermarket chains to small convenience shops, dubbed “bakkals.” The company also exports to more than 40 countries, including the U.S., Russia, China, Australia, and countries in the Middle East.

The company was established in 1995 by three Turkish families. In 2016, Bridgepoint acquired Peyman from its founders and Esas Holding.