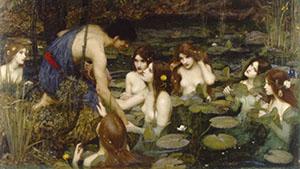 An art gallery in Manchester, England has taken down a painting that features naked women, ostensibly to spark discussion amid the #MeToo movement. Critics say it’s simply censorship.

On Friday, the Manchester Art Gallery announced it would be temporarily removing a painting from the 1890s in order to “prompt conversation about how we display and interpret artwork” during a time when several sexual harassment scandals are in the headlines.

“The gallery exists in a world full of intertwined issues of gender, race, sexuality and class which affect us all. How could artworks speak in more contemporary, relevant ways?” the gallery’s statement reads.

John William Waterhouse’s 1896 painting Hylas and the Nymphs depicts a scene from Greek Mythology where Nomia, a water nymph, lures Hylas, one of Heracles’ companions, to his watery grave. The seven mythical creatures in the painting are all shown as naked women.

The painting used to hang in a room called “In Pursuit of Beauty,” which features paintings of beautiful women, some of whom are represented without any clothing.

“This gallery presents the female body as either a ‘passive decorative form’ or a ‘femme fatale’. Let’s challenge this Victorian fantasy!” the museum stated in the announcement.

However, one Twitter user pointed out that the museum is missing the point, because the nymphs in the painting are depicted as the ones with all the power, luring Hylas to his death.

The painting was taken down as part of an exhibition by Sonia Boyce, the gallery team, and other collaborators, including drag artists from Family Gorgeous. Together, they want to explore “‘gender trouble’ among the gallery’s 19th century painting displays and wider culture.”

The museum also left post-it notes at the empty space where the painting once hung and encouraged visitors to write down their thoughts and paste it on the wall.

In response to one critic who asked how “looking at a blank wall” would spark any kind of debate, the gallery tweeted that the decision to take the painting down was the result of “many people coming together to prompt conversation about how we display and interpret artworks.”

While the museum responded to some Twitter users who voiced their opinion using #MAGSoniaBoyce, they were not able to handle the flood of tweets from critics who blasted them for censorship. Many users were quick to compare the museum to repressive governments that have censored art in the past.

The new euphemism for censorship will be “re-contextualisation.” Watch out for it.

However, Clare Gannaway, the gallery’s curator of contemporary art, said the goal of removing the painting was to spark a debate, not to censor. She said, however, that the decision to remove the painting was also influenced by the #MeToo movement.

“It wasn’t about denying the existence of particular artworks,” Gannaway said, according to The Guardian. “It is not just about that one painting, it is the whole context of the gallery.”

Artist Michael Browne attended the event where the painting was removed and said he was worried historical paintings may soon be completely replaced with more modern art.

“We don’t know how long the painting will be off the wall – it could be days, weeks, months. Unless there are protests it might never come back,” Browne said, according to The Guardian. “I know there are other works in the basement that are probably going to be deemed offensive for the same reasons and they are not going to see the light of day.”