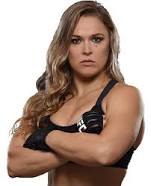 The rumours were true. Ronda Rousey is now officially a WWE superstar.

And while she didn’t utter a word, or take part in a match, she made a big enough statement, standing in front of the two WWE women’s champions, Charlotte Flair and Alexa Bliss, as well as the Royal Rumble winner Asuka, and pointing to the Wrestlemania sign.

A lifelong pro wrestling fan Rousey was linked with a switch to the WWE from the moment she left the octagon following her TKO loss to Amanda Nunes at UFC 207 in December 2016. Her ‘Rowdy’ nickname was a tribute to WWE legend ‘Rowdy’ Roddy Piper, who gave her his permission to use his nickname during her MMA career.

And that relationship with Piper, who sadly died in 2015, was evident at the Royal Rumble, as Rousey walked into the arena wearing his old leather jacket, given to her as a gift by Piper’s family.

Rousey was a trailblazer in the world of mixed martial arts, as she became the first woman to win a bout in the UFC, and the promotion’s first-ever women’s world champion.

And now she’s swapping the octagon for the squared circle as she fulfills a lifelong ambition to become a WWE superstar.

“It was something I always wanted to do but I never thought was in the cards for me.

“And now that I realise I really do have this opportunity, I feel like my six-year-old self would totally kick my ass if I didn’t take it.”

Rousey joined the UFC having already won the Strikeforce women’s bantamweight title and was immediately crowned the UFC champion.

She retained the title against Liz Carmouche in the first-ever women’s bout, then went on to defend the belt five more times in a dominant reign as world champion.

She became a global sporting icon, appearing in major Hollywood movies, but eventually lost her title in dramatic fashion when she was knocked out by Holly Holm at UFC 193 in Melbourne.

Rousey disappeared from the limelight, only briefly appearing on Saturday Night Live during a 13-month hiatus from the sport. She returned at UFC 207 and was stopped in 48 seconds by reigning champion Amanda Nunes

Rousey never officially announced her retirement from the UFC, but it was generally accepted that her loss to Nunes would be her last.

Now she’s back as a WWE superstar. And, just as they were every time she stepped into the octagon, the world will be watching.